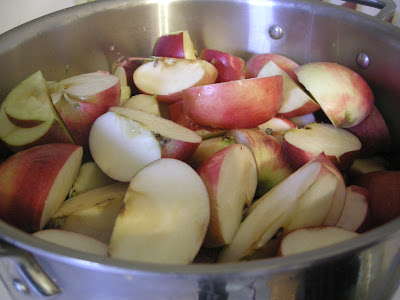 The only time I make applesauce is for Hanukkah. For me it is the only accompaniment to latkes. Other than that, I can definitely live without it for the rest of the year. Izzy, on the other hand, is a different story. He has had a hankering for applesauce for several weeks, brought on no doubt, by some school snack.

On Monday,I finally broke down and hauled home 7 lbs. of apples from the Greenmarket so that we could make a giant vat of it for our latkes. Until fairly recently, I thought that making applesauce was far too much effort for something I wasn't wild about eating. Then I discovered the most marvelous secret. You don't need to peel or core the apples. Simply cut them and throw them into a pot with a few other ingredients. Simmer 20 minutes and then have your under age helper mash them up for you like this: 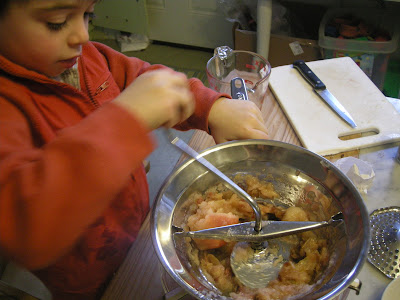 What I think is an awful chore, he thinks is great fun. "No mama! Let me do it.!" This food mill and my ever-willing little helper do all of the work, separating the skin, pits and core from the sauce. What is left is a lovely, pink-hued sauce. You can make huge vats of it and freeze it. Or serve it to a band of hungry latke eaters..which we will be doing soon. 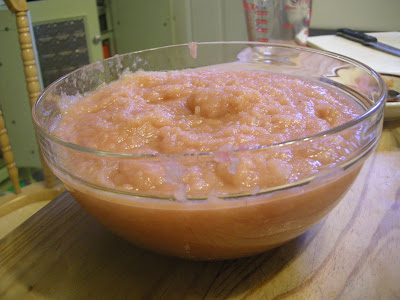 Applesauce ( From The Joy Of Cooking)