Unless I kill it myself. Since the likelihood of that is virtually non-existent I have decided to accept the next best thing.

You see, there are advantages to having a "country" brother who lives in rural New Jersey. He has many acres of land upon which graze numerous deer. Although he himself is a vegetarian, he allows hunters on his property. They often offer him part of their bounty which, in the past, he declined. This year, he offered it to me..

At first I felt rather ambivalent about taking the meat. The idea of hunting bothers me. Even though I feel no qualms about eating farm-raised meats, the hunted variety provoked ugly imagery. I have an unfortunate picture of hunters as blood-thirsty, gun-toting rednecks and wasn't sure I could support that. On the other hand, the idea of adding part of a deer to my freezer full of lamb, was infinitely appealing. My brother helped me decide. Turns out that this recently published article, Locavore Get Your Gun, would have been even more persuasive.

My brother G. explained that the hunters on his property use bows and arrows and that hunting deer is a reasonable way to control the ever-burgeoning deer population. His argument, along with memories of venison meals eaten in Paris, convinced me to accept the offer.

So the day came a few weeks ago when my brother called to say that he would be delivering the goods to my door step. I had no idea what to expect. What I got was several packages wrapped in plain white paper and labeled in black like this one... 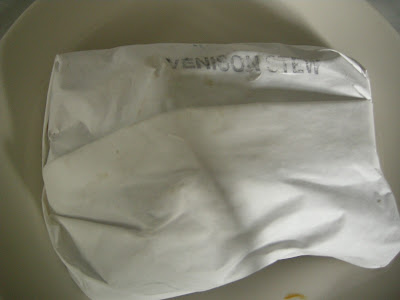 I put the packages in the freezer and haven't gone near them until yesterday. I decided it was time to experiment so I defrosted the stew meat. When I explored potential recipes, I discovered that I was lacking many of the recommended ingredients but figured I could whip up something reasonably simple. 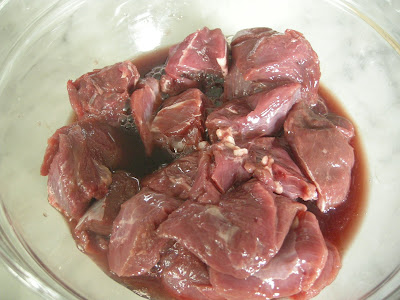 I marinated the chunks of meat in red wine with shallots, thyme, and bay leaf, hoping for the best. After eight hours in the marinade, I seared the chunks of venison in olive oil and set aside. Then I sauteed onions, carrots, and shallots, seasoned with thyme, salt and pepper. I added 1/2 lb. of shiitake mushrooms, sauteed 5 minutes more and then returned meat to the pot and added a cup or so of red wine and a cup of water. I brought this to a boil and allowed to simmer for 1 1/2 hours. I served this on a bed of bowtie pasta ( for lack of a better noodle around the house) and sprinkled with coarse salt. It was a warm, comforting meal on a cold night.

Izzy was a most accommodating assistant, and for the first time, wielded the tongs to remove the meat from the pot. He also sauteed the vegetables, stirring them so that they wouldn't stick. He was intent upon inspecting the raw meat, asking questions about the blood, though that is another story.

I was quite pleased with my first foray into the world of venison (as was Izzy who had three helpings, not to mention his papa who ate the rest of the pot) but next time hope to add a greater complexity of flavors to the dish. 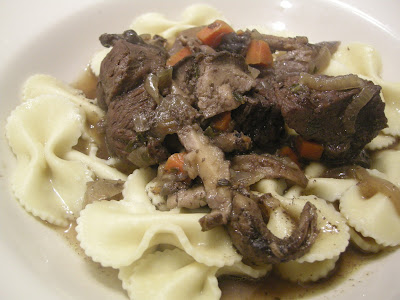 There is much more to be said about venison which is so different in flavor and texture from other meats. I will regale you with tales from cookbooks and the like soon or during my next venison experiment.

Oooh, that venison looks good! I'll look forward to hearing more about your adventures with your brother's bounty.

Juniper and bay are great flavors with venison. I've got a recipe here for Hungarian Venison Stew (can't remember who I wrote this one for) if you want to give it a try . . .

Ooh.. I just checked our your recipe and I hope to try it! Thanks.