OY: The Joy and Pain Of Latkes..In celebration of Hanukkah 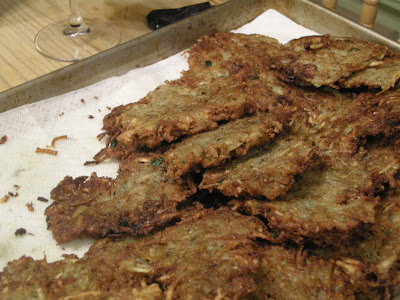 Latkes. The basic potato latke recipe includes grated potatoes, eggs, matzoh meal salt, pepper and plenty of oil. The ingredients sound innocent but achieving latke perfection is a challenge. I blame this on the potatoes which, once grated, have a mind of their own. They change colors and exude liquid. You need to work quickly in order to prevent this but with a large batch of potatoes that isn't as easy as it sounds, especially with a pint-sized assistant who slows things down.

For today's party, I needed to prepare about 8 1lbs. of potatoes . First off, a food processor cannot hold that many potatoes so it has to be done in batches. And the longer the process takes the greater the risk of the potatoes changing colors. Trust me, pinkish brown or gray potatoes do not a pretty latke make.

With Izzy at the helm, pulsing those potatoes took longer than usual and the color change was difficult to avoid. To add insult to injury, I decided to add more oil to my pans than usual, creating a deep-fried burnished latke, certainly not to my liking but nothing a little applesauce couldn't fix. My preference would be for a golden brown latke, slightly crisp on the outside and soft on the inside. Which is how they came out last year..when someone else was frying my batter..was my batter different or the frying staff better..?

My only saving grace was that I decided to prepare the latkes early, before the guests arrived. In fact I started at about 12:30 and finished about 3:30..It was a messy and drawn out endeavor to say the least but it was over and I was able to shower before the party began, removing the oily residue which clung to my clothing and hair. All showered and ready, there were still a few things left to do. Latkes were not the only thing on the menu, which looked like this: 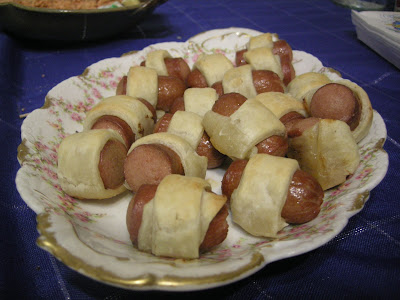 For once, everything was prepared in advance and I managed to have the hors d'oeuvres out when guests arrived. And even though the latkes were not perfect, everyone ate them anyway. My dad and Izzy liked them and Izzy even ate them cold, for lunch. This applesauce was just what they needed. 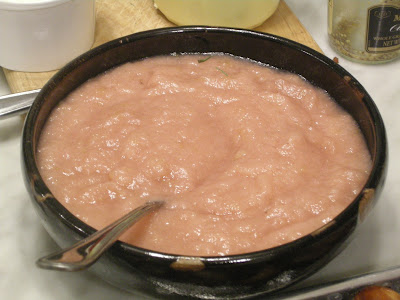 But I still crave the perfect latke so I might even make a small batch of them later on in the week, just so I can have one that is cooked the way I like. Otherwise I will wait until next Hanukkah.

And in case you were wondering, my brisket, which I will share on another occasion, must have been wonderful because, I., who is notoriously picky, was seen gobbling it up!

I think the cheesecake needs more attention on this blog. The rest of the food was good, but the cheesecake was the highlight of my evening. My mouth is watering as I type this. -jm

The cheesecake was just mediocre. You will have to wait until I make a great one..then I will post about it! I did post about my pumpkin one..have you ever had it?

I dubbed the latkes "latkelicious". As was the rest of the food, particularly the desserts: while my stomach let me know when I had eaten enough cheesecake and rugelah (sp?), I was happy the applesauce was left out, because I could have eaten the bowlful.