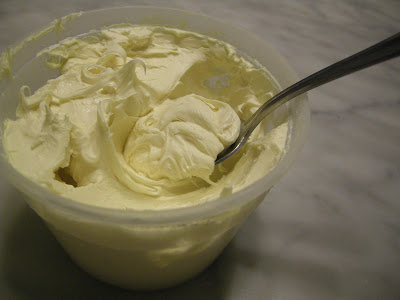 Izzy: I want bananas and sour cream for snack.

Me: Okay. Go get the sour cream from the fridge while I slice the banana.

Izzy: I don't see it in the fridge.

Me: We only have the kind from the farmer.

Izzy brings it to the table and we open it up. Admittedly, this batch is not nearly as tempting as the first one we had received, definitely one drawback of small farmed goods, wild variation in flavors and textures from one week to the next. The sour cream is buttery yellow in color and ultra-thick, with a hint of cow. Izzy eyes it suspiciously. 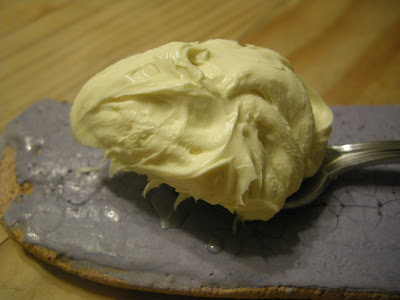 Izzy: I don't like that kind of sour cream. I want the other kind.

Me: That is the only kind we have right now. I know it doesn't taste as good as it did last time but I can add some cinnamon sugar to it and that will perk it up. You could also have yogurt instead or even some heavy cream.

He proceeds to leave the table. Tears well up in his eyes and his face reddens as he folds his arms in a huff and plops down on the couch (an Oscar-worthy performance to say the least). I see him watching me and then he gets up and comes back into the kitchen. We examine the sour cream together. I totally understand his point and I think we can remedy the situation..so I tell him I have a great idea.
Me: I am going to mix heavy cream with the sour cream to make our own special sour cream.

Izzy watches with great interest as I stir the mixture which begins to look remarkably more like regular old industrial sour cream and eliminates the cow-like odor. I spoon it over the bananas and add a touch of cinnamon sugar. Izzy eats it up, musing about whether or not we can make homemade sour cream one day. Meanwhile I am wondering how we are going to use up the rest of that sour cream.
p.s. I had to dump the sour cream after A. sampled it and said it tasted like fish.