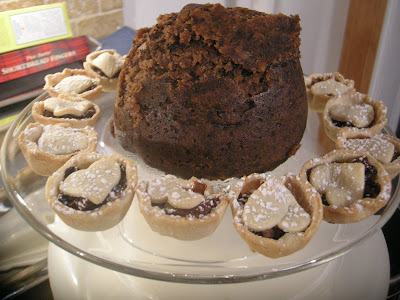 One perk to being Jewish is being invited to someone else's Christmas. After my Thanksgiving debacle and Hanukkah bash, I was more than grateful not to have another holiday meal to prepare.

This year we were invited to my friend H.'s home for her version of a British Christmas. The thought of participating in her Christmas was particularly alluring, especially after H. described some of the dishes she would be preparing. I had all sorts of images of strange fruitcakes, puddings and the like dancing around in my head.

I promptly offered to contribute a dish and somehow ended up in charge of Mince Pies. Now if, several years ago, someone had told me that I would even eat such a dish, let alone prepare it, I would have been shocked as, in my mind, it fell into the category of "awful English food" full of dried fruits, nuts and booze. With the help of Nigella, my mission was easily accomplished (a subject which will surely merit its own post).

My friend led me to believe that her British Christmas would resemble Thanksgiving and in a certain way it did only it was better. For one, she cooked it, not me. But besides that it was full of quirky additions.

Let's start with the turkey. It emerged from the oven perfectly browned and upside down (which didn't seem to phase H. a bit and must certainly be the secret to one of the juiciest, tastiest turkeys I have encountered). The only downside was that the tender, plump breast was not browned which really didn't matter.

As for the sides, there was a cranberry sauce and numerous vegetables. Brussels sprouts with bacon and pine nuts, leeks and courgettes in butter (love this), roasted potatoes, roasted parsnips, peas and carrots..

We began the meal by popping open some Christmas crackers, each one filled with a note and a treat. That may have been slightly diverting but it was dessert time that really took the cake. That was when our gracious hostess presented the Christmas pudding, all aflame, flanked by the mini mince pies, which were in danger of going up in smoke. 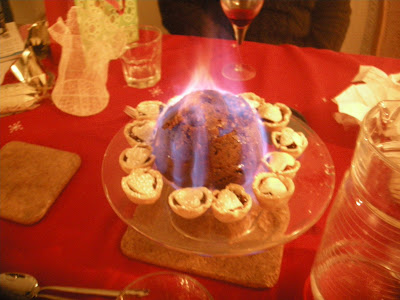 When the flames died down, the pudding, with heavy cream, turned out to be a fine dessert better than I would have imagined. After dinner drinks were sipped while we nibbled and all in all it was a swell dinner indeed.

Whoever said the British can't cook or don't eat well need just eat chez H. They will be most pleasantly surprised!

Back to an old post ... DH and I made pigs-in-blankets for his family yesterday. I don't really like them, although of course I had to sample one or two, "just to make sure they're OK." His family inhaled them in about a minute. Thanks for the link to Martha's recipe!

Ann: Thanks..they were pretty tasty but somewhat mishapen as I used mini-muffin pans rather than tart ones.

Eileen: Glad you made them. Did you use the Dufour pastry?