Izzy can't stop talking about his friend J., so imagine his excitement when I told him that we would be skating and then dining with him and his family.

Yes, an ice rink has opened in our neighborhood and Izzy has been itching to go there since he heard about it. Not only would he get to see his friend J. but they would skate too..Izzy nirvana to be sure.

I remember skating as a kid. I tagged along with my brothers to the local duck pond which froze over (yes that used to happen here in New Jersey, way back in the 20th century). I had two-rudder skates which worked just fine on the tiny pond. All I had to worry about was sinking into a hole.

Skating here was a different story at this bright and shiny new rink. I rented a pair of silvery skates with velcro closures for Izzy and similar ones for myself. Izzy walked fine on them but when he hit the ice the real show began. Watching him plop down was like watching a slapstick comedy. He kept leaning backwards and falling on his bottom. Or, he bravely clung to the sides of the rink. When that wasn't working he would try to pull me along in such a way that I felt we would both go tumbling down. And then he became frustrated and said he had had enough of skating and his leg hurt. Turned out one of the skates had pinched him leaving an awful open wound. OUCH.. 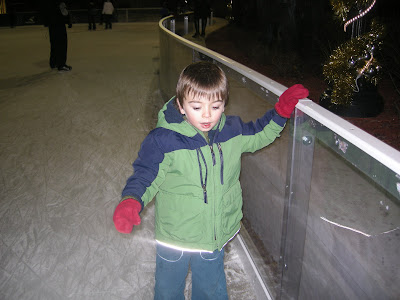 The reward for all of our skating efforts was our dinner at J's house. His mom and grandma had prepared some Indianish foods with Mexican accessories. The highlight was the chapati made by J's grandma. Izzy chewed on one along with his dinner. The kids had dessert and just as we were about to leave, Izzy announced that he was still hungry, which he has a habit of doing at home but has yet to do at someone else's house. I tried to steer him toward getting his coat on and then he whispered, "Bread" and I knew he was looking for some more chapati. I mentioned this to our hosts to let them know how much he had enjoyed it and before I knew it, J's grandma was back at the stove, preparing another batch for Izzy.. 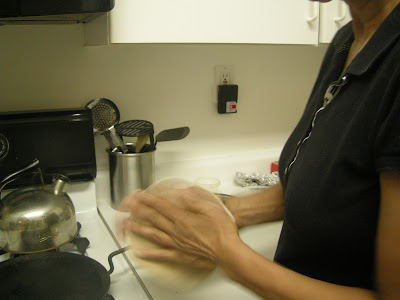 Izzy was fascinated by the preparations and I had to hold him up as he watched her knead the dough, roll it out, slap it and cook it on the stove-top. When she had finished, she gave one to Izzy which he devoured on the spot, and then presented the others in a package to take home. We left feeling very spoiled...