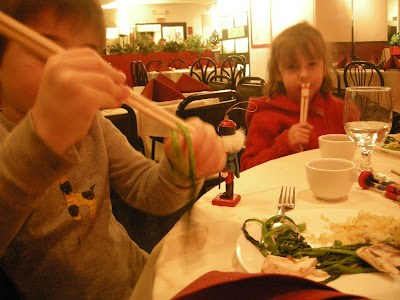 My friend L., who hosted the Nutcracker brunch, also happens to live near the most incredible Chinese restaurant. Since the Nutcracker ended close to dinnertime, I thought we could squeeze in a visit there, on our way home with friends H. and I.

When the ballet ended earlier than we had anticipated, H. said it was too early to eat. Given that she was not raised with a Chinese food obsession of sorts, she didn't understand the devastating effect this pronouncement would have on Izzy. When I told him the bad news he immediately burst into tears. He must have been dreaming of the food for days, since I had promised him we would go there. I must say I was pretty disappointed myself.

Eventually, H. had the presence of mind to suggest that we get take-out instead which calmed him down. When we got there we decided it was late enough to eat after all and Izzy happily scrambled out of the car.

In the past we have only eaten there with L., who knows exactly what to order. At first I wasn't sure I would remember all of the dishes we liked but I figured it out quickly enough. Izzy and I were as smitten as ever but I am not sure if H. and I. took a fancy to it. In fact H. had even said that they rarely eat Chinese food and that I. had not really eaten it that much.

I worried that I. wouldn't like it but she seemed willing to try. If nothing else, she did manage to eat a few bites of "pink fish" (shrimp shumai) and she was also inspired to try her hand with chopsticks. Who knows what the future will hold? As for Izzy and me, we were just glad to get our fix!
Posted by Izzy's Mama at 12/06/2007 10:52:00 PM