Pigs In Blankets: An Enduring Allure 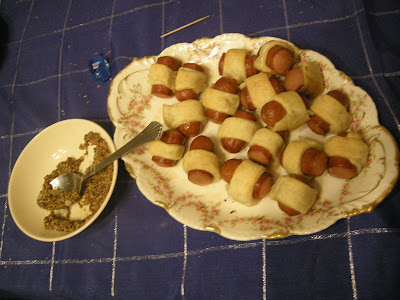 Pigs in Blankets at a Hanukkah party? To my goyish husband's ears that sounded indecent. For the record, they were cows, not pigs at our party because although I am far from kosher I like to keep pork out of Jewish holiday celebrations. No prosciutto latkes in this house.
What my husband did not realize is that cocktail wienies have been standard Bar Mitzvah fare for ages and that lately they have been making a comeback on the cocktail party circuit. They would suit our Hanukkah party just fine.
The inspiration for preparing my these little cocktail wienies came from this article which appeared in The New York Times last year. The only thing I found problematic was finding an organic cocktail wienie. My search was unsuccessful so instead I fashioned my own out of Applegate Farms Great Organic Hotdogs, cutting them in thirds. Worked like a charm, following Martha Stewart's foolproof recipe and using Dufour Puff Pastry which is the other essential ingredient.

Rolling the wienies is the perfect job for little hands. Izzy was a whiz at it and made quick business of the entire batch, making 50 of them in no time at all. We only had twenty or so guests but fifty wienies magically disappeared in less than 30 minutes. Next time we will make 75! Long live the cocktail wienie!
Posted by Izzy's Mama at 12/11/2007 09:44:00 PM

I couldn't keep from writing to you because I work at Applegate Farms and saw your blog entry. Glad those were a hit (they look delicious). IF by any chance you end up making them again and your event allows for pork, I wanted to let you know that we recently came out with our GREATEST LITTLE COCKTAIL FRANKS, which are made from organic, certified humane pork.

Ariel: They are incredible..The excellent hotdogs with that amazing puff pastry are a true match! I will certainly look out for the Applegate cocktail franks..any chance they will be made with just beef? I am sure there is a huge market for it!!