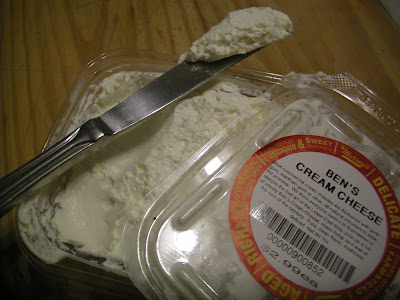 Disputes over the best New York Bagel crop up time and time again. But what about the topping? How many articles or cream cheese comparisons do you read about? In my opinion, the only thing worth topping a bagel with is cream cheese, with butter as an acceptable second. What is a bagel without its cream cheese?

Yet how often does one hear about the cream cheese offerings? Which ones are the most delectable and spreadable? For years I had been partial to the Zabar's variety, which appears to be regular cream cheese, whipped with sour cream to lighten it.

But then I came across Ben's Cream Cheese. It has now become a weekly habit. Must go to Murray's Cheese to buy Ben's..it is smooth, yet not airy or gummy. I sing its praises to the world, for it is unlike store-bought cream cheese and doesn't cost much more than organic. It is so superior it doesn't even need a bagel. In fact I love it on Amy's Semolina Raisin Bread and English muffins too, or just licking it plain, off the knife.

We have been eating it for about the past month or so and I thought Izzy was as smitten with it as I. He has grown up eating Organic Valley Cream Cheese and he is having a difficult time adjusting.

Over a dinner of eggs, beans, bagels and cream cheese tonight he asked, "Mama, why don't you get the other kind of cream cheese anymore?" "Because this one tastes so much better." His response, which can only be born of the "eat what you know" syndrome, "It's not that I don't like the taste, I just want the old kind."

He'll get used to it, I'm sure. Just as I hope he gets more accustomed to good bagels,instead of the Lender's variety his classmates bring in for snack.

Which brings me to my bagel preferences.


Columbia Bagels were my favorite but I rarely bought them because they were too far up town (and have closed down anyway). So I will settle for H & H, Murray's, or Hudson Bagels. In the bagel realm I take the best in close range, or none at all. In fact, Izzy remarked that we almost never eat bagels at home anymore and I realized it was because we don't have any really decent bagel shops in Jersey City. On our way home from pottery class tonight, I bought a few to have for dinner. My cream cheese was begging for them.
Posted by Izzy's Mama at 2/26/2008 08:40:00 PM

I am going to have to start reading every post, especially on Tuesdays, to make sure I keep you honest on delivering my goods. If only I had read the blog Wednesday morning, I would have found you out.

That'll teach you not to skip a day!! If you are good I will provide the goods next week.