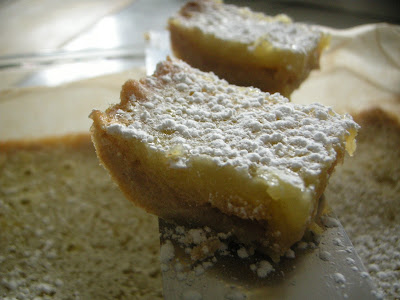 Lemon desserts have never been at the top of my list of things to bake. For given the choice between lemon and chocolate, I would be more inclined to choose the latter. Because of this, I have not had much experience in the lemon realm, particularly with lemon squares. I have made decent ones in the past but I had no idea which recipe I had used. When the urge for lemon squares struck, I wasn't sure where to turn.

I found this recipe for lemon bars, which seemed to be well-thought out and executed from the looks of it. But I couldn't leave well enough alone. I doubled the recipe and then decided to use half whole wheat/half white flour for the crust. I had to bake the crust for about 8 minutes longer than indicated, which I also had to do with the filling (maybe the timing was off on the original?).

The results looked reasonably good but I found the crust to be somewhat doughy, rather than light. Whole wheat flour tends to produce leaden baked goods and it usually better to err on the side of less rather than more when substituting. I must confess that the real reason behind the substitution was that we had run out of regular flour and Izzy was having a p.j. day (more on that soon).

The doughy crust didn't seem to bother anyone but they probably haven't eaten a light, crusty square lately either.
Posted by Izzy's Mama at 2/10/2008 10:45:00 PM

As a happy recipient of one of your lemon squares, I have to say you are too hard on yourself. The crust may have been a bit heavy but the overall effect was lemony goodness. You have no idea how wrong lemon squares can go. My attempt at Christmas tasted more like one of those eggy sushi things. However, a group of raccoons in a woody area of W. PA thought they were delicious. To each his own. D.

D.: Are you saying that you something in common with those raccoons?