A Truly Alien Universe: Izzy Attends A Party On Mars

The very thought of Mars 2112 frightened me and still does. Until Izzy was six months only, he actually lived only four blocks from Mars (as did his father and I) yet we never had the inclination to enter (shocking, I know.). I had an inkling that today's party would be an adventure of sorts so I tried to go with an open mind, especially since Izzy and his friends were so very excited about the prospect of an other worldly visit.

The trip there was one of the highlights of the outing (at least for most of the kids) though it could be a bit scary for some. The space vehicle shuddered and shook throughout the five minute simulated voyage, reminiscent of an amusement park ride or a plane going through turbulence. Izzy is still asking if the shuttle blasted through the bricks of the building and how that was possible. Another mom told him it was "pretend". (Hey wait a minute, kids are allowed to believe in Santa (not mine, mind you) but they can't believe that they were in a real spaceship? I am very confused.)

Upon arrival on the red planet, we were left to find our way through the reddened, noisy atmosphere, to balloon festooned tables where ominous sippy cups sat, awaiting an alien beverage (soda?). I pounced on the waitress before she could deliver that and instead opted for watered down punch.

Izzy chose to sit alone at the kids' table so I kept an eye on him from afar. When the food arrived I kept my thoughts to myself, this would be his first taste of a fast-foodesque burger and some sort of chicken fingerish surprise. Despite my disgust, I placed a burger and some fries on his plate along with a good dollop of ketchup and a chicken finger. Then I had to avert my eyes and try really really hard not to think of beef recalls and downer cattle...

I went back to my own table, several tables away when I heard, "Mama, Mama." What was it? He wanted to show me that he was eating what he called, "Chicken Nuggets." Oh, I was oh so delighted to know. Call me when its over please.

Throughout this alien (ating) eating experience, aliens were floating about the room, dancing and shaking hands with the partygoers. Izzy kept his distance.
Then there was cake. It was big, it was brown and it was chocolate. The slice which arrived was enormous. Izzy's friend J.'s dad admonished that too much cake would give J. a bellyache. Izzy only ate a small amount of his, clearly stuffed from the burgerganza. Later on he said, "I listened to J. and didn't eat too much cake today. That was a good idea, right Mama?" A wonderful idea.

The party ended with a trip to the gameroom, which was almost more than I could bear. Too much noise and too many games I would clearly avoid. There were some child-like options but sadly, many were "out of order" so we breezed through as quickly as possible avoiding the guns like the plague.

As we earthlings finally made the return trip..to Broadway and 50th Street, I breathed a sigh of relief, having made it through the harrowing journey. Although it was not my cup of tea, it was a great thrill for Izzy as I am sure it was for the birthday boy. It has certainly sparked his interest in all things space-related and in fact one of the goodie bag surprises was some freeze-dried ice cream.

He had to sample it as soon as we got home. We immediately had to research what astronauts eat and how they eat. I suppose there is good in everything, even trips to alien planets. A new food realm to be explored. I bet you didn't know that Emeril Lagasse and Rachel Ray have both had a hand in creating space food..No comment! 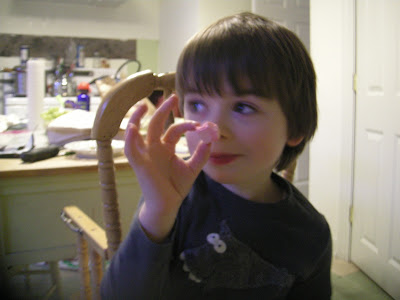 Hee ... we once met our preteen nieces there, before we had our own kids, and I still remember the shocking awfulness of the pizza. I'm glad you survived the party!

Hilarious! Your complete disgust and revulsion is palpable. (I'm not laughing at you - with you, my dear.)

Okay, I've never heard of this Mars place(my husband knows it but I haven't been out of the house in 3 years...) but it sounds like Izzy must have been in heaven. (I know where you were - you don't have to spell it out.)

My philosophy is that all this stuff is okay as long as it comes from someone else. It's cool to go to Chucky Cheese for a friend's party or eat box mac and cheese at a playdate or have a little ginger ale with Grandma, but at home we are in the habit of doing other things. I figure that's how I'll try to maintain some perspective. And keep myself sane.

You do realize this is exactly how he is going to piss you off when he's a teenager? Better start doing that reverse psychology thing today!

PS Oh! I also responded to your duck thing on my blog. Thanks for writing. You know, we really should get the kids together, you're so close by. I do believe in having wine with my playdates, so keep that in mind...

Eileen: I used to live 3 blocks away from there but never, surprisingly had the inclination to enter!

Kim:The only reason I knew about Mars was because I lived nearby. But you haven't been missing much. Izzy is still talking about the party. It was truly thrilling for him.

I appreciate your balanced philosophy but Chuck E. Cheese?? I just couldn't. I here I was thinking I was being open-minded and tolerant letting him go to Mars AND eat the food there!

Oh, the dreaded teenaged years, don't remind me! He already likes to push my buttons by telling me about the icky snacks he has at school. I try not to react too loudly, that is why blogging helps!

How dare you post my grandson's picture on your internet without the permission of his mother!

You must get signed permission for having pictures of anyone published.