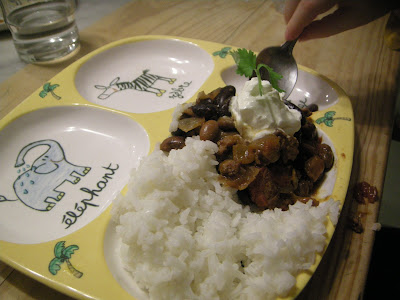 If you remember, Izzy and I recently made a list of dishes we wanted to make in the upcoming months. One of them was chili. Izzy's plan was Zans Cans Chili from The Green Eggs and Ham Cookbook. Definitely not one of the winners from the book, it basically called for dumping some cans of beans and tomatoes in a pot, along with some sauteed meat and a few spices.

I had to modify the recipe just a touch (despite Izzy's protests) so that I could eat it too. Izzy's friend O. joined us for the preparation, which for the boys basically meant opening the cans (learning to use a can opener is important, no?) and stirring the various components as they were added.

While the chili bubbled away, the boys played. When it was finished, I offered up tastes. Izzy was more than thrilled to have some but O. shied away from the dish, defying my theory that most children will eat what they cook. I suppose there is an exception to every rule, eh?