Was Peanut Butter The Culprit?: A Vist To The Allergist 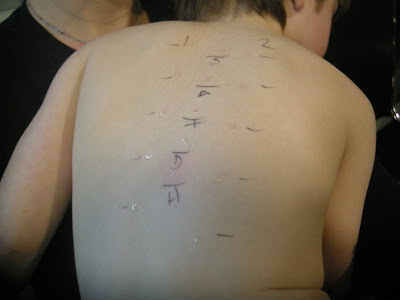 Poor Izzy, they used him as a pincushion. First they wrote on his back and then three strips with about five or so pins each, were pricked into his back. I held him and he whimpered but it wasn't nearly as bad as I had anticipated. The worst part was waiting with him,naked, cold and hungry, for the proscribed 15 minutes.

The doctor, highly acclaimed pediatric allergist, Dr. Paul Erhlich, was among the kindest, gentlest doctors I have ever visited (and, small world, it turns out that Izzy has played with his grandkids in the park). Izzy immediately felt at ease with him which made everything go that much more smoothly.

And what did we find out?? So far, negative on all counts. He said there are rarely false negatives but since the incident happened so recently, it would be best to wait two more weeks and then retest, along with a few other potential allergens.

Meanwhile, we still have to keep away from peanuts, sesame and their ilk. The good news is that I needn't be as vigilant as I thought. Chocolate produced in a factory where peanut products are used will be just fine!!! Bring back the mini-morsels and Ghiradelli! A cause for celebration in and of itself. Not to mention that I no longer need to envision a life sans eggs, wheat and Birnn Chocolates.
Posted by Izzy's Mama at 2/08/2008 09:55:00 PM