Moustache Mania: Dining Out With Friends 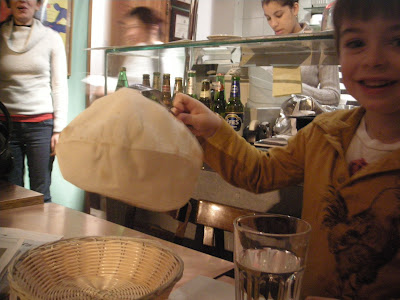 If the idea of pillowy, billowy homemade pita appeals to you, run to Moustache. It has been around for at least 10 years, tucked away on Bedford Street in the West Village. Izzy and I have been frequenting the place for months now, often stopping by on our way home from clay class.
Tonight we brought along some friends to share the pita extravaganza. The kids were all delighted by the puffy pitas, fresh, hot and steaming from the oven. Three children five and under, in one small restaurant, might not have been the wisest idea but it was early and the kids were mostly intent upon eating. A bit of chaos did ensue as the allure of the food began to wane. At least they had the pita maker to entertain them as he whirled the dough in the air, making a crust for their crispy pitzas, feather-light crusts with inspired toppings, the ground lamb being our favorite.

Not only are the pitas noteworthy but the other food is enticing as well, with a fabulous merguez sandwich and wonderful vegetarian salad options too.
Posted by Izzy's Mama at 2/12/2008 10:00:00 PM