Some Bunnies Like Other Food Too: The Velveteen Rabbit And Lunch at Risotteria 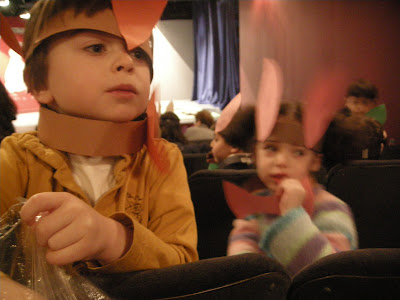 Fashioning our own "field-trip", Izzy and I, along with two of his school friends and their mamas, went off to Greenwich Village to see a small production of The Velveteen Rabbit, one of my top ten favorite kids books. Little did I know how much food fodder would result.
The kids were hungry before the performance and were munching on some snacks (with rabbit ears on). Izzy requested yet another snack and J.'s mom pulled out a bag of carrots..perfect for those little bunnies. Izzy and J. appreciated the bunny connection but their friend I. said, "Bunnies like other food too." Especially that particular bunny whose mom describes her as quite the picky eater.
After the wonderfully charming performance, which included original songs and choreography, we were off to lunch. I chose Risotteria, despite Izzy's protests. I figured creamy rice would certainly be pleasing to all. I hadn't counted on the place being full but it was and we were stuck waiting in the bitter cold..It was only a ten minute wait which worked out in the end since I got to have a second weekly stop at Murray's.
Being seated at Risotteria was a new experience as this was our first time dining out with three kids. One is one thing, three is a different story, particularly when they are seated together on a banquette. They were surprisingly well-behaved, considering their propensity for mischief!
In "monkey-see, monkey-do" ordering mode, we all ended up with the same risotto dish, which was shitaake mushrooms, green beans, corn and truffle oil. The portions were ample enough for mother and child to share. They were warm and satisfying on a cold day. The delightfully airy bread sticks placed on the table served not only as amuse-bouches for everyone but later 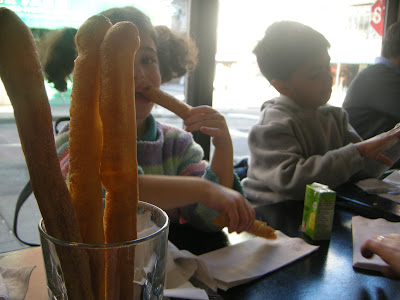 in the meal they morphed into kid entertainment, becoming swords and letters of the alphabet, no crayons necessary.
When the food arrived, Izzy and his friend J., dove zealously into their risotto while their friend I. was more tentative. I could see that it was a new food for her and she was certainly reluctant to try it. However I did note that she observed her classmates and was willing to at least taste it. When her mom spooned some into her mouth, she seemed content to eat it. That is progress, in and of itself! 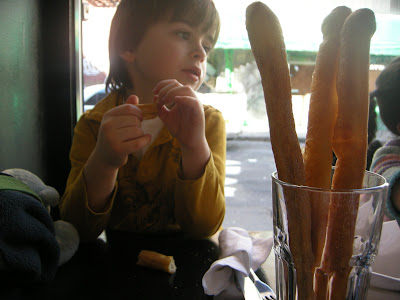 Lunch lunched, Izzy had other things in mind and was ornery and bouncy on the trip back, thankfully with no incident. Pleased with the overall success of the outing, I would attempt future restaurant meals with three children in tow. You never know what some bunnies might eat!