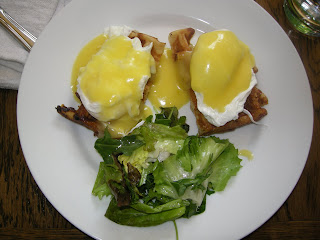 Whilst I was busy trying to rub elbows with my favorite foodies, Izzy was with a babysitter, L., from his past. They were at Madison Square Park, playing and apparently only eating pretzels. I'd like to think that he didn't snack that much in anticipation of the great lunch I had promised him.

When the talk had ended, we met up with L. and Izzy. Then my friend S., Izzy and I made our way to Resto, a place I discovered last night after searching for a good Belgian brunch. I had worried about getting a table but being on the late end of brunch paid off and we were seated almost immediately.

I was extremely disappointed to find that they had removed their Duck egg with cracklings from the menu but quickly found a replacement. The Eggs Benedict on Waffles certainly was enticing and I had to have it, along with something called Spring Pea Stoempt.

The Eggs Benedict were a true delight with a Belgian twist, the savory waffle was infused with bacony bits, the eggs were pillowy soft and the accompanying salad cut the richness of the dish. Izzy and I were both in heaven. I could have easily finished the dish alone, as could Izzy but we shared it and the Stoempt (which didn't seem to be more than some diced seasoned potatoes with peas) We also had a giant bowl of Granola with fruit, topped with Sheep's Milk Yogurt.

Meanwhile, S. feasted on a supposedly more heart healthy meal of an Egg White omelet with sunchokes which was than balanced by some unhealthy Belgian Frites.