A Little Bit Of France in Jersey City

Before Izzy's Papa and I moved to Jersey City, we had to scope out the restaurant scene. The presence of a homey French restaurant was essential so when we discovered the charms of Madame Claude Cafe we knew it might just work out here.

This small restaurant is housed on an out of the way corner in a quirky shaped structure. The whole establishment is reminiscent of many a place in France, from the languid service down to the teeny tiny bathroom. The food is simple and comforting, from savory crepes to slow-braised lamb shanks. We have eaten chez Madame Claude on several occasions. The food has been somewhat uneven and the portions are sometimes small but what it sometimes lacks for in cuisine it more than compensates for in the general convivial ambiance. The husband/wife owners are extremely kid-friendly since they have two of their own and are quite tolerant of little ones under foot. They even offer crayons and toys to your antsy toddlers.

Tonight we were able to share in the Madame Claude experience with Grandpa Joe and Grandma Laurie (who had never been). Once again, though, timing was a bit off for Izzy, who I feared would fall asleep in his mushroom soup. 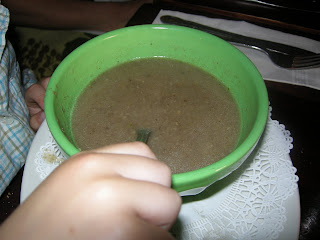 As it turned out, Grandma Laurie and her antics managed to keep him awake, even in time to not really eat his main course, which was a savory crepe filled with ratatouille and goat cheese. Izzy didn't seem overly fond of either dish and spent awhile searching for mushroom slices amidst the sea of pureed mushrooms. He seemed justifiably disappointed, since I suppose he was expecting a chicken broth loaded with sliced mushrooms. As for the ratatouille, it was too heavy on the bell peppers, not enough balance with the other flavors and had the odd addition of lavender, which seemed to make its way it to many of the dishes we sampled this evening.

On the other hand, my appetizer, a warm calamari salad, was a huge portion of somewhat chewy though tasty tentacles and other squid parts combined with artichokes, carrots and zucchini floating atop a garlicky broth. This portion was certainly large enough for a main course. 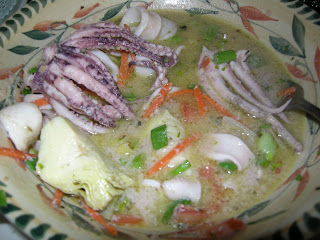 Izzy tried one bite but decided against seconds because the calamari took to much effort for his taste. As a main course I had the Duck Confit which was not nearly as tender as it should have been . This saddens me because I know they can do it right here and there is no reason for that mistake. Izzy loves duck but the texture of this leg was beyond palatable for him and when he bit into it he asked he if was eating bone.

Too bad. On my way to the WC I spied what I should have ordered, one of the soft looking lamb shanks that had been my second choice. Alas, next time I will peek into the kitchen before ordering. The other bright note was that Grandpa Joe and Grandma Laurie were much happier with their choices, Goat Cheese Salad, Onion Soup and Free-Range Chicken with Orange/Olives and Green Tagliatelle (though both ordered that).

They used to serve lunch - I was told a few months ago that they no longer do so - and I would take Ella there fairly often, when we were in the mood to spend $20 on lunch, or as a reward for a dull laundry day, whichever came first.

Up until recently, when asked where she would like to go to lunch, she would reply, "The French Cafe." It IS kid-friendly, and was sunny, warm and nearly empty in afternoons. I suppose that's why they focus on dinner now. Perhaps an early dinner is in order one of these days, to introduce Lena.

MC was the great hope of our old immediate neighborhood and, unlike Lombardi's and Baker Boys, they have flourished. Thanks for reminding me in this entry!

i had the same problem with the duck confit there. . .