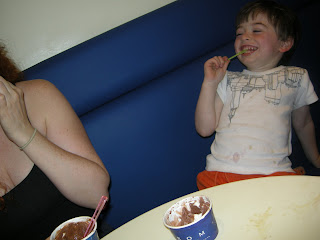 Izzy and I finally made the trek to the Upper West Side, to see what all the fuss was about. Granted, I had other errands in the neighborhood, but Grom was number two on my list. How could I keep away with all the recent buzz surrounding this new gelato hotspot. Other bloggers have been singing its praises for days now and it sounded too good to miss.

My friend R. lives in the neighborhood so I called to see if she would like to join us to wait on line. She had never even heard of the place and she lives only about seven blocks away. I expected an especially long wait since it was so hot today and we arrived at about 4 p.m.. We waited for about 15-20 minutes before arriving at the front of the line. I had ample time to peruse the flavor choices which today included offerings such as fiordilatte, gianduja, yogurt, hazelnut, crema di grom (vanilla with chips and biscotti?) and the flavor of the month, which, though the name escapes me was something akin to strawberries and cream.

Izzy had the Crema di Grom and the Strawberries and Cream. He ended up trading for my Gianduja and Fiordilatte. R. had the Yogurt and Chocolate. I came expecting to swoon but left feeling vaguely disappointed. R. had no expectations but she wasn't won over either.

The texture was silky, but the flavors seemed somewhat muted compared to other gelati I have eaten. Now don't get me wrong, if I lived nearby I would probably be there daily, but for the hefty price tag placed upon these frozen delicacies. I don't mind paying extra for quality but at least make the portions a decent size. The small size which was more like kiddie size, cost over $5.00. The medium was $5.75 and the amount seemed rather stingy.

I appreciate the fact that Grom is devoted to using organic ingredients and local resources and I would recommend it if in the neighborhood. Next time I am at Zabar's or Fairway I will give them another chance since I haven't yet had the granita.

Meanwhile, I still remain a loyal fan of two other gelaterias, Cones in the West Village and Babo, in Jersey City. At both places, the portions are ample, the flavors vibrant and memorable.

p.s. For those Pinkberry or Yolato fans out there, my friend R. gave me an interesting tip..Bloomingdale's restaurant, 40 Carrots, serves a frozen yogurt that has a cult follwing and is supposedly superior to both..I will add it to my list.
Posted by Izzy's Mama at 5/26/2007 09:17:00 PM