A New Bean In Town 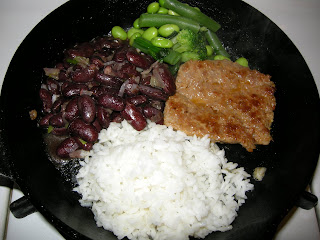 Izzy has eaten black beans, white beans and even pink beans but tonight was the first time he tried red beans. He even helped me open the can (yes, I often cheat in the bean department when I want dinner in a hurry (although I recently discovered that canned beans have far fewer nutrients than dried so maybe I need to change that).

As soon as the can was opened, Izzy sampled some and deemed them acceptable. Hence tonight's dinner was Red Beans with Rice, Turkey Sausage and Mixed Greens.

This is one of those quick and easy dinners that everyone needs and can be easily altered with whatever you have in the fridge.

1 tablespoon olive oil
3 purple scallions, finely chopped
3 shallots, finely chopped
a few sprigs fresh oregano chopped
1 can red kidney beans, drained
1. Saute scallions and shallots in a tablespoon of olive oil for 5-8 minutes til soft, add oregano and stir.
2. Stir in beans and simmer
Serve atop rice with turkey sausage with whatever veggies you have around the house. Dinner in under 30 minutes!

P.S. When I handed him the plate he wouldn't touch the beans. He said, "They don't look red anymore, they are black. I wanted the red ones." I said "They are the red ones. They just darkened from cooking." He continued to only eat the other things on his plate and I asked him to try one bite. He did and then just kept on eating them.
Posted by Izzy's Mama at 5/19/2007 07:41:00 PM

i can't believe i live practically next door and i'm not coming round knocking every evening around dinner time. . .