What to do now? I really wanted the milk but I was worried. When I received word that it was time to place another order (if I were so inclined), I looked over the product list again. The pull of the unknown was irresistible so I cautiously decided to order a few items this week, ultimately deciding that the likelihood was slim that this farmer would have tainted products.

I eagerly awaited my first delivery, my excitement tempered by a twinge of nervousness. We were at home with friends when there was a knock at the door. It had arrived. I ferried my booty into the kitchen to survey it (because of a mix-up, not everything was there but this was resolved by the next day). In the end, I received 1/2 lb. cream cheese, 1/2 gallon of goat milk, 1 lb. of cultured butter and a pint of sour cream. All of these items were packaged in basically unlabeled (save for black magic marker) plastic containers, giving the appearance of a homegrown, clandestine operation. 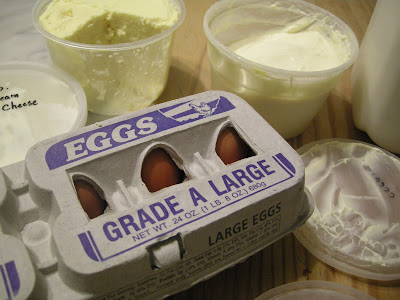 I had to open everything and sniff it all. To what end? I couldn't say, but everything seemed to be fresh. Izzy insisted on sampling the goat milk right away so we both did. It didn't taste significantly different from the non-homogenized cow's milk we have been drinking lately but I don't think that my palate is yet accustomed to the subtle nuance. I need to conduct a taste taste in the near future...any takers?

Meanwhile, I am still left pondering how it is that all of these women (and now me) put their blind faith into this farmer. I suppose it is as X (the woman who spearheaded this group) said, "We put our faith into the big companies which supply the dairy we buy at the supermarkets, so why is this any different?" And she has a point because the reality is that milk which undergoes pasteurization is likely to be contaminated with more filth than one would care to imagine. I know that when I start to think about contaminated foods, the stories that resonate are those which involve large corporations with wide distribution, not local businesses or farms.

Have I made the right decision? How do these products compare to what we usually eat? Stay-tuned for more raw milk raves and rants.