My Brother Doesn't Even Eat Chocolate 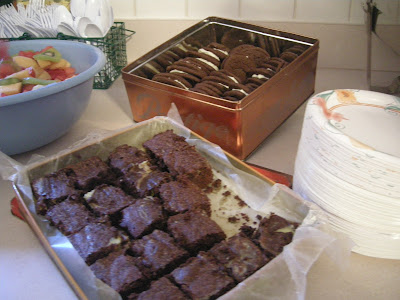 Why then did I feel compelled to make these brownies and these oreos for his birthday? I must be an awful sister. I let my sister--in-law order a carrot cake for my brother and instead I decided to indulge the rest of us in retro-chocolate heaven.
Let's face it, I just don't really like carrot cake and being a slightly selfish baker, the thought of baking something I didn't plan on eating didn't seem quite right. On top of that, I probably wouldn't have been able to recreate the tree that decorated his professionally prepared cake. Ultimately my decision may have been for the best.
I chose to make these homemade oreos, taken from Smitten Kitchen a food blog with an impressive roster of incredibly sinful, delicious sweets. I had great success with them the first time and knew that they would be a hit. I doubled the recipe and was up til all hours filling the cookies and cleaning up errant flour and confectioner's sugar.
Since M. had also requested brownies, I took the easy route and I chose Smitten Kitchen's recipe for Cream- Cheese Marbled Brownies. They looked delectable in her photos and I figured they were fool-proof (as long as the fool doesn't fool with the ingredients).
With Izzy at my side, we measured, mixed, stirred, dripped and swirled. Brownie batter is such fun to work with. The recipe was so decadent that I left out 1/4 cup of sugar. I didn't think it would make much difference. I also noted that the cream-cheese swirl didn't seem like enough to create the cheesecake note I had been imagining, I should have added more but left it as is.
The resulting brownies had an incredibly wonderful texture but I feel that the cream cheese muted the chocolatey flavor and perhaps the omission of sugar left them less intense than other brownies I have eaten. Don't get me wrong, these brownies were still quite luscious but just not the brownies of my dreams. Try them with the correct ingredients and they may just do the trick.
The lesson learned from this baking episode is that next time I should be more generous. I may bake a tried and true chocolate for the chocolate crowd and something new for my brother. Who knows, if I don't fool with the ingredients, it may even be something I might eat.
Posted by Izzy's Mama at 10/14/2007 09:58:00 PM

Okay, my mouth is watering! The brownies and oreos sound scrumptuous!

I don't bake, so how these treats come out right for you is a mystery to me. But my husband and littlest baby just love chocolate. Your post makes me want to give it a whirl - thanks!

You have a great blog here and you should consider me a new fan! I'm putting you on my blogroll!

Oooh, those oreos look fantastic! My mom used to make marbled brownies all the time when I was a kid, but I have to admit, they weren't my favorite.

I'm like you . . . I always futz with the ingredients (which makes me an awful baker!). At the moment, I'm debating whether or not to take on baking the cake for Noe's first birthday. It has all the potential for a colossal mess. Any advice?

yummy mummy: Thanks! I think I may be a better baker than cook though I do enjoy doing both. I have worked in a couple of bakeries which helps a bit. These recipes are quite simple.

p.s. I will add you to my blogroll too!

Lia: How could you not bake the cake? How many people are you having? For Izzy's first we had about 30 and I made cupcakes. Whether you choose cupcakes or cake, just make it simple and give yourself plenty of time! I always like the Billy's Bakery recipe on Martha. Simple and homey!

Izzy Eats . . . fabulous idea about the cupcakes! My mom always baked these elaborate theme cakes, so I kind of had an all-or-nothing mindset. And you're right, how could I NOT bake the cake for my daughter's first birthday?! I don't know about you, but my well-meaning, non-foodie friends are always trying to talk me down from doing "too much" in the kitchen and occasionally, I get too tired of standing up to them and just cave. Thanks for setting me straight! And for the recipe.

And by the way . . . I added you to my blogroll too. Yummy mummy, I'm looking forward to visiting your blog!

Lia: My problem is that I do take on too much when it comes to parties and I always claim I will do less the next time. But then it is so hard for me to resist. The key has been organization and advance prep. Sometimes I manage, other times not. It is a work in progess. I would love to post the photos of Izzy's first birthday.. When you see how cute he looks with the homemade cupcakes, you will be sold!

Well I'm glad to hear your friends think you're crazy too ;-)! And I hear you on the advance prep . . . I'm all about advance prep. I actually wrote an article for last month's issue of Cooking Light on "stress free" entertaining and that was one of the themes I kept ramming down everyone's throats.

I talked to my hub about your cupcake suggestion and he thought it was a great idea too, so we're definitely sold :-)! (although I'd still love to see the photos of Izzy's first) I'm thinking of making half carrot cake cupcakes (it's the one cake I've had consistent success with) and half chocolate cupcakes. Or is that just doubling the work? Ugh. In any case, my best friend is coming in from Colorado, so at least I'll have an extra set of hands to frost the night before.

Cheers! And, as always, it's great to see you at Swirling Notions!