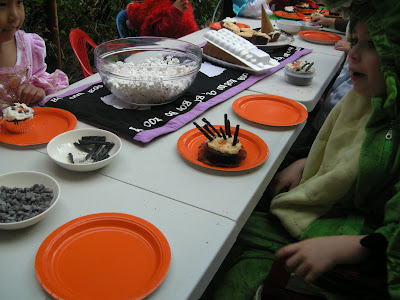 This looks like fun, right? For Izzy it was and I am glad of that. Friends, play, cupcakes, Pin-the Nose On the Witch, candy, more candy...What could possibly be wrong?
Well a whole lot if you are me, somehow having envisioned a party for adults too, with eating, laughing drinking...I guess that was last year's party, with my friends and their kids. This year's party was more of Izzy's friends and their parents. Some of whom may be my friends but others of whom are simply acquaintances, seen in passing on the way to school. To me the mixture spells undeniable awkwardness. Just a disparate bunch of grown-ups thrown together for the sake of their children's friendships. But hey, I could give it a try.
It was my intent for it to be a party for all. Which meant booze and plenty of food made to appeal to adults and kids alike. But my hopes were squashed when, after cupcake decorating and Pin-the-Nose-On-The-Witch, a few of the party goers decided to up and leave just as I was about to serve dinner. I looked at the heaping platters of food in dismay, wondering what had gone wrong? Izzy seem confused as well. Most people like to eat at my house. What was it? The lure of trick-or-treating was too strong? 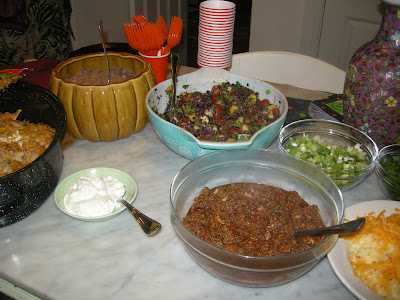 Those who did stay were rewarded with some of my favorite Mexican-inspired dishes and were sufficiently appreciative. There was a dish I have been making since college, introduced to me by friend Alyse (I wonder where she is today.). I like to call it Tortilla Pie but she called it Green Enchilada Casserole. It is essentially a lasagna made by layering tomato/green chilies/onion/cheese and sour cream mixture between tortillas and baking it. It is a good foil for my spicy beef tacos which were also on hand. My friend D. made her famous Mango Rice Salad (will need that recipe one day) and one sweet mom tried her hand at Refried Beans, which she had never attempted before. On top of that I received wine, beer and a lovely bouquet of flowers which graced the table.


It was a lovely spread if I do say so myself. I even managed to have everything ready in advance, with barely any last minute scrambling and A. home in time to help with decorations and front yard sweeping.

The party didn't fizzle out but when it did end, Izzy ran out onto to front stoop with the big basket of candy which had sat, neglected by the front door (our chocolate and lollipops managed to arrive at the very last minute). He was disappointed that he didn't have much time to hand it out to the trick-or-treaters and we agreed that next year's Halloween would be all about sitting out on the stoop and greeting all of the neighborhood's witches, ghosts and goblins..Who needs parties anyway (sniff, pout)?
Posted by Izzy's Mama at 10/31/2007 09:38:00 PM

Your blog always leaves me drooling- The spread looks great, the meals looks simply tantalizing- and the commentary is (what can I say)- "off the chart." I am always left craving for more!!!

Anonymous: Thanks for the feedback.. I do try!