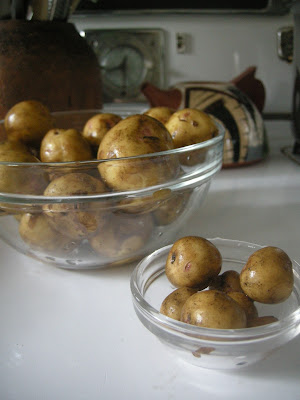 There I stood by the kitchen sink, preparing a rather large bunch of bok choy for yesterday's dinner. This may seem like an ordinary thing to be doing but for Izzy it was downright unusual. While intently observing me at work he asked, "Is that grown-up bok choy?" I had to smile at that one, for of course I wouldn't have put it in quite the same way myself.

Up until now Izzy had only encountered baby bok choy so when confronted with the large leaves, he needed to name them.

What strikes me as amusing is Izzy's greater familiarity with the baby version of vegetables rather than their grown-up counterparts. Potatoes, eggplant, carrots, artichokes,zucchini, peas and bok choy are just a few examples of baby produce that have crossed his path.
When I was small, I think the only baby vegetable that I encountered was the occasional 'baby corn' at Chinese restaurants. Izzy's vegetable experiences have been so much more appealing and interesting. Behold these adorable baby potatoes and baby eggplants that the farmer has brought us. Who wouldn't want to at least try them? 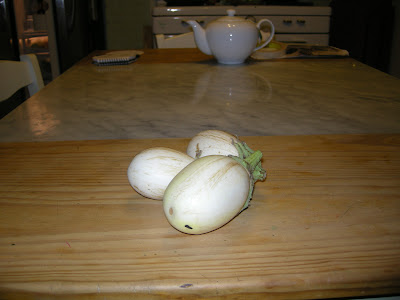