It's The Thought That Counts: Back Forty 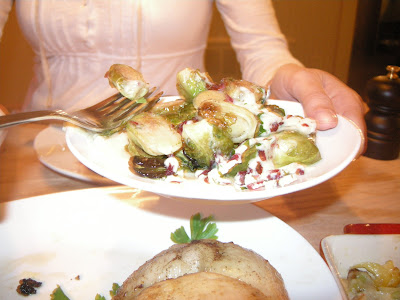 If you keep up with the NYC food scene, you may have already heard that Peter Hoffman, of Savoy, an intimate restaurant featuring local, seasonal foods, has opened a more casual spot in the East Village, called Back Forty. I was thrilled to hear about this, knowing that Peter puts great thought into the food he produces.

So when my friend Sarah suggested that we try it tonight, only one night after what I believe was its official opening, I couldn't resist. Despite the gnawing little voice in the back of my mind telling me to wait, at 5:50 p.m. we found ourselves on a crosstown bus, headed for Avenue B.

I worried that the place would be packed but it was quite early for the East Village crowd so for a short spell we had the place almost to ourselves. It is simply furnished with wooden tables and benches, some communal, others private. What led us to Back Forty was the promise of their menu which certainly has its heart in the right place. It is small but inspired, with some wonderful side portions of things like Parnsips with White Anchovy and Aleppo vinaigrette, or Roasted Brussel sprouts with Dried Cherry/Shallot butter.

Our meal began with a fabulous Concord Fizz, which featured freshly crushed Concord grapes . After that wonderful beginning, the unfortunate but somewhat expected occurred. Our meal was wildly uneven. I won't go into the details because I imagine that even in a few days, the kitchen staff will iron out the kinks, and the dishes will be expertly executed.

I am in love with the concept of this restaurant and do hope that it will succeed. I want to go back to Back Forty and tell you that the Grass-fed Burger with Spicy Homemade Ketchup is phenomenal and that the House-made Sausage is succulent.

In the meantime I will try to stick with the 'tried and true', restaurants that have been tested, if not by me, that at least a host of other diners. The lure of the new is appealing to me but not necessarily the best way to encourage my child to remain polite and engaged at the table. Izzy barely ate tonight save for a few morsels of each dish. The end of the meal found him singing songs out the front window of the restaurant, overcome with fatigue and hunger.

Grass fed burger? That sounds great! I appreciate that you gave the restaurant some time to get it together before you wrote about the particulars. This is very fair of you, my dear.

I'd love to check this place out...maybe we can all meet there one day and see how it is!

Food-bloggers have been much reviled by the restaurant industry for their "instant" reviews. A real restaurant reviewer visits a restaurant on several occasions before publishing a review.

I would prefer to showcase restaurants I love rather than bring one down (unless I have had a truly unpleasant experience). In this case the restaurant is brand-new, all the more reason to go easy on it.