Plight Of The Urban Kitchen

I grew up in a spotless house with nary a speck of dirt or food on the kitchen floor, in the suburbs. Bugs, vermin, even ants were unheard of. Those were for poor unfortunate people who lived in big, dirty cities (like I do now.)

The vile creatures (dare I speak their name?) that plague urban kitchens never even entered my radar until quite a late age. I think my first sighting must have occurred in college, while visiting a boyfriend's apartment. I went into his kitchen one night and found some in a utensil drawer. Now he was the type who was always ready to whip something up for me so, suffice it to say, I was rather disgusted. Though, mind you, not disgusted enough to keep me from returning to eat grilled cheese in his bathtub.

Years passed before I met up with the filthy cockroaches (there, I said it) again, the second time being in my very own New York City apartment. They were at least small and easily squashed. Yet it was less than comforting to think that they were nesting on my turf. I bought the "Roach Motels" and sincerely hoped that check in would be speedy. Surprisingly, they did the trick and I lived there for years after with no sign of the nasty critters. Until a few months ago.

I thought we were safe. We had lived in this house for almost four years and hadn't spotted one. Then I heard talk of the neighboring apartment building. It was said that they had an awful problem and were bombing their basement. Great, with row houses, there is space in the party walls (shared walls) and plenty of crevices for all sorts of critters to make their way over to safe territory. Our toxin-free home would be a swell abode.

It began with the appearance of one enormous "Water bug". I swear the thing was so large that in a darkened room it could have been mistaken for a mouse. There is no way in the world I would or could squash such a thing so I shrieked and then covered it with a bowl. I hoped that my husband would be kind enough to discard it. Instead he decided to chase me around the house with it. This sighting was then followed by the occasional, errant bug in our kitchen which then turned into the weekly bug. Things were certainly NOT improving and then we had a flood in our basement. Instead of seeing the prehistoric, gigantic roaches, they began to show up in smaller versions.

One evening I had swept up some crumbs in a small pile and left them by the broom. I forgot to use the dustpan and left them til morning. When I awoke I found this cryptic text message from my husband:

wE tHe Cookkaraccha peoples inForm Yu of OUr gReat WorSHIp of BRoom AnD gREat gifTs.


The meaning of this was lost on me even though I thought it was uproariously funny. Turns out he encountered a few of my buggy friends having a party about the broom when he had gone down for a post-midnight snack.

The bug build-up was beginning to wear on me. Even though the sightings weren't daily I had to acknowledge there was a problem. I didn't want to get some toxic exterminator so I had to research green solutions. Seems there are several that may do the trick but it just so happens we haven't spotted one in weeks, except for the giant one that scurried by tonight. 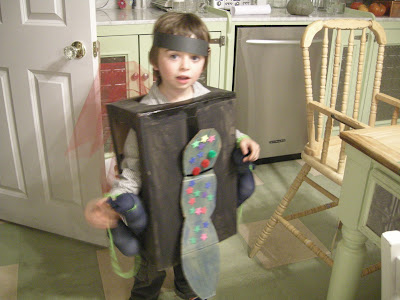 Having witnessed my shrieking shenanigans and examining the hideous creatures that we have disposed of outdoors, Izzy has gotten a close up view of something I would have had no clue about at his age. Tonight, it seems, he decided to exorcise his demons. He raced around the kitchen in his new bug costume, yelling,

"I'm a roach mama. Are you going to squash me?"

Yes indeed, the urban child certainly does have a different Halloween experience, doesn't he?