And E., a fellow lamb aficionado, delivered it to my doorstep and it is currently residing in my freezer. How did this come about? The story goes like this...

Plain and simple. We like to eat meat. I don't cook it all that often because I am loathe to purchase it from the supermarket and it is awfully expensive when purchased from Whole Foods or the Greenmarket. I began to think that there must be an easier, cheaper way to get my hands on some local, pasture-raised beef. So I googled and read and heard tell of people buying half a cow. Which was actually what I had in mind. I soon discovered that the purchase of half a cow requires several people, cars, coolers and agreement over parts. I wasn't prepared for such an effort and investment, at least not yet.

And then this happened...I was walking by a vendor at the Greenmarket who had posted a sign advertising "Whole Lambs Available". I stopped to discuss the possibilities but realized his lamb wasn't for me since the deadline was too soon. Meanwhile I began to ponder lamb, which somehow seemed more sensible. Lamb is our favorite meat and a lamb is easy to divide. I found a partner who was willing to split the lamb with me and then I approached our favorite Sheep Lady from Three-Corner Field Farm.

She made it all sound fairly simple though somehow, some way, it took several weeks of emails, discussions and a detailed butchering list before we were ready to go ahead. Filling in the butchering list was certainly a new way of looking at lamb for me. Normally I would just buy rib chops or leg, maybe stew meat. Now I had to choose. Whole leg, split leg? Loin chops or loin roast? I felt like I was taking a test and hoped to choose the best.

It was a relief that no decision needed to be made regarding the tongue, heart, kidneys and other offal, which all went to my partner in crime. She celebrates Greek Easter and apparently those parts play a starring role in her soup. Parts settled, lists provided, we waited for word from The Sheep Lady.

When I saw her at the market this past Wednesday, there was some concern that it might not happen until the following week. In the end, the lamb was slaughtered on Wednesday and placed in the deep freeze, to make the trip down from upstate New York on Saturday, where E. picked it up. The entire lamb cost 335.00, so $167.00 each.

Saturday afternoon, Izzy and I were busy painting when the phone call came. E. was waiting outside, with lamb in tow. Izzy and I went out to the car to greet her and carry our half inside. A half a lamb is surprisingly small. This is what my portion looked like: 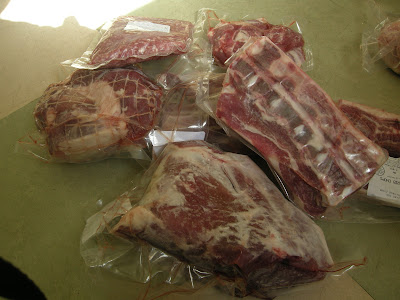 I managed to fit it on one shelf in my freezer. I wonder how many meals it will make? 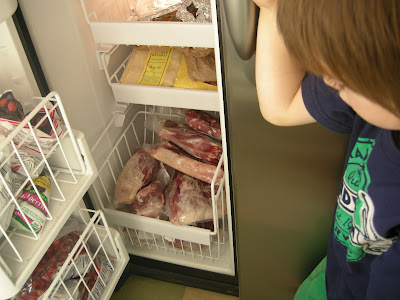 This is what I got: 4 rib chops (should have been 6 but the way they were packaged I gave two to E.), 1 .25 lbs. ground beef, small loin roast, leg of lamb split into two roasts, 2 lamb shanks (will need to supplement), 1 lb. stew meat, and a lamb shoulder roast. Stay tuned to see what I do with it!

I love this post! And I have to share a funny "lamb" story of my own. My friends, who are transitioning their vineyards to organic, have (had) four "baby doll" lambs--they're tiny little things, about the size of a dog, and they eat the weeds but can't reach the grapes.

Well, one of them had a misfortune and my friends had to put her down . . . but they had her butchered so that they could properly honor her life with a gathering. So we have a "so long Susan" feast on the books for November, where each of the guests has to cook a different part of Susan. So I'll be thinking of you while I'm cooking little Susan riblets! :-)

Not being a country girl I have never heard of "baby doll" lambs. They sound adorable and small enough to keep in my tiny city backyard. Can't wait to hear what you eat at the feast!

I love lamb too! (hint, hint, hint).
Also, I appreciate the way swirlingnotions acknowledged that there is no better way to honor an animal than by not letting it go to waste!

Sarah: We would love to have you over for a lamb feast but can lamb actually compete with pilots?