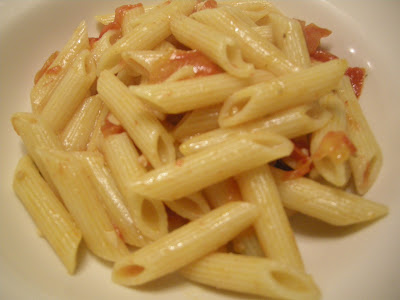 The above dish may look like an ordinary bowl of pasta with tomatoes but I fooled you. It's not. It is pasta, cooked Lugano-style.

A., just back from a long trip filled with less than mediocre eating, had one culinary tidbit to share. He mentioned one decent lunch which occurred in a department store cafeteria, Manora. He had heard it was the place for cheap eats and was pleasantly surprised to discover that they actually made his pasta to order, while he watched. What was notable about the cooking was that the pasta only cooked for half the normal time in the water and continued cooking with the sauce for the second half. I always finish my pasta with the sauce but only for a minute or so, for the flavors to meld.

Tonight I decided to follow the Lugano method which is actually more labor intensive since it requires the cook to continually stir or shake the pan and add extra pasta water if necessary. The pasta absorbs the cooking liquid, making the dish more flavorful.

1.Saute garlic in olive for a minute or two, then add other ingredients.

2. Simmer gently for 5 or so minutes until tomatoes release their water.

4. Meanwhile, boil pasta for 1/2 the suggested cooking time and drain (save a cup of the liquid).

This was my first experience with this method of cooking pasta . It works well with raw tomatoes since they release a lot of water. I imagine that it would work well with other types of sauces too.
Posted by Izzy's Mama at 10/20/2007 08:28:00 PM