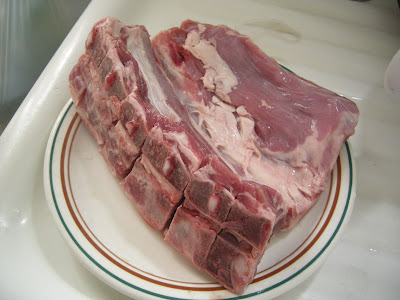 Today was the big day, time to defrost the first of my lamb parts. I took out the loin, thinking it would make a nifty roast. When I removed it from the package this is what it looked like. I wasn't sure what to do with it so I went to my cookbooks and elsewhere for answers. What I discovered was that lamb loins are typically boneless or cut into chops. Nowhere could I find any reference to a bone-in lamb loin. What was the butcher thinking? Why had he left those little bones? Do they add flavor to the roast? Was it some secret butcher's cut?

It occurred to me to try turning it into chops on my own but decided that I might end up mangling the lovely meat. So in the end, I decided to treat it as boneless and simply increase the cooking time. I did notice that the butcher had been kind enough to split the bones for easy cutting so I assumed there was a method to his madness.

I chose a very simple preparation, as I usually do with lamb. I stuffed it with fresh rosemary and garlic and then sprinkled it with salt and pepper. I browned it over high heat in an oven-proof pan and stuck it in the oven. I had a meat thermometer on hand to check for doneness, especially since A., likes his lamb rare (125 f). When I removed the roast from the oven, I let it rest a bit before carving it which was actually a snap. We ended up with two chops each. I slightly overcooked it, at least for A., who prefers his lamb medium rare, whereas Izzy and I are happy with ours done to medium. 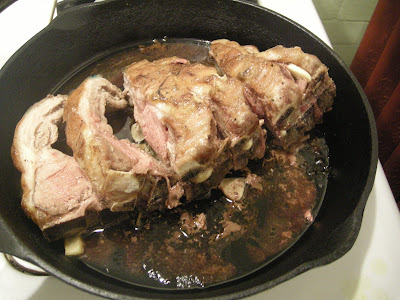 Izzy couldn't get enough of it and after his two chops were gone he proceeded to gnaw on the bones. Because of the crazy weather, we dined outside, in the warm darkness. Our feast included some new potatoes sauteed in olive oil with shallots and some incredible butternut squash. 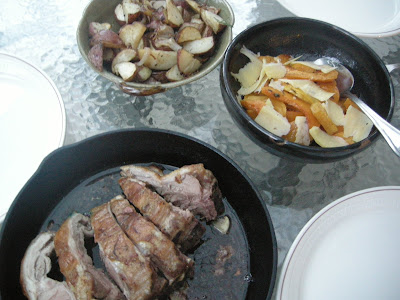 I went to Union Square today, to see if the Sheep Lady could give me any insight as to why the bones were left on and she said that it is done that way on purpose, exactly why I don't know but it did cook up quite easily so I can't complain.
Posted by Izzy's Mama at 10/23/2007 08:17:00 PM

I wanted to thank you for your comment on my blog - and I totally agree with you that the Hawthorne Valley Bianca is an amazing cheese.

Your blog is great and I really applaud your commitment to raising your son to eat well and love his food. Keep it up!

OMG! I have to cook lamb tomorrow...you made me so hungry with this post! I love your simple preparation. That's the way to go!

I agree with Rebecca - your kid is lucky...and you can tell him I said so!

Thanks for checking in with me on my blog. Sorry it has taken me so long to get my blog roll shifted around and getting back to you (and everyone else) with comments. This ear ache has kicked my butt, but I'm nearly in fighting shape, so watch out!

Rebecca: I look forward to more posts on your blog.

Yummy Mummy: Did you make any lamb?

I bought a half a lamb from an upstate farmer and due to a freezer failure will be trying to figure out what to do with a bone-in lamb loin tonight. I probably will follow your thought of treating it as boneless and adjusting the cook time.

Peter: How did the lamb turnout? Where did you buy your lamb? Sorry about your freezer, the same thing happened to us over the holidays and we ended up tossing too much precious meat.

Yours was the only recipe/discussion I could find on a bone-in lamb loin, as I had no idea it a bone - and then no idea how to cook it. I rubbed the center with a past of garlic, rosemary, tyme, and sage - then seared in a cast iron - and finished in the oven. Flavor was great but difficult to carve (my bone wasn't scored by the butcher).

Keep up the great cooking, eating and posts!