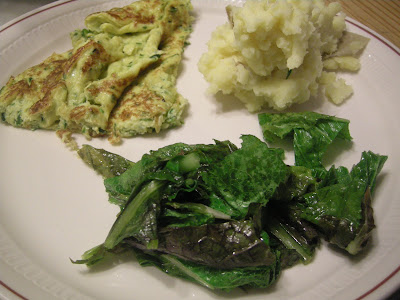 I keep marveling about how my CSA deliveries, along with a few Greenmarket dairy items, allow me to prepare an almost 100% local meal (except for the olive oil).
Consider this menu from last week: Flat Zucchini Omelet (ignore that silly name, it is tender, light egg perfection), Yukon Gold Mashed potatoes and Mixed Greens sauteed with garlic.
This was another meal in a flash, especially with Izzy on potato mashing duty. He didn't always like to eat them (odd seemed I somehow assumed they all kids ate them) but once I got him involved in the mashing process, he became far more interested in eating them. 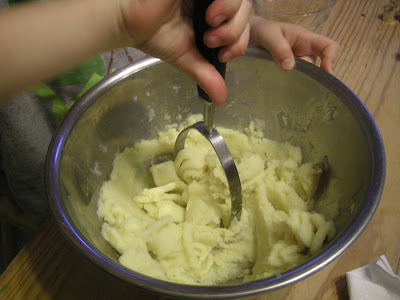 With Izzy mashing, I was able to grate the zucchini, wash the greens and do the other minor preparations. If you have any zucchini hanging about, this is one of the easiest things you can do with it and you won't be disappointed.

Flat Zucchini Omelet (based upon a Richard Olney recipe from Gourmet)

Trim ends of zucchini, then coarsely grate on large holes of a box grater. Toss zucchini with 1 teaspoon salt in a large bowl and let stand 30 minutes.
Transfer zucchini to a colander, then firmly squeeze handfuls to remove excess liquid.
Heat olive oil in a 10-inch heavy skillet over moderately high heat until hot but not smoking and saute zucchini, stirring until golden, 6 to 7 minutes. Remove skillet from heat and stir in herbs, then let mixture cool to warm, about 15 minutes.
Lightly beat eggs with zucchini, pepper, and remaining 3/4 teaspoon salt in a large bowl, using a fork.

Heat butter in a 7- to 8-inch nonstick skillet over moderately high heat until foam subsides and butter has a nutty fragrance.
Add egg mixture, distributing zucchini evenly with a heatproof rubber spatula, and cook, lifting up egg around edges occasionally to let any uncooked egg flow underneath, until egg mixture is set around edge, about 1 minute.Reduce heat to moderately low and cook omelet until softly set but top is still moist, about 3 minutes.
Shake skillet to loosen omelet from pan, then slide omelet onto a large plate.Wearing oven mitts, invert skillet over omelet, then holding skillet and plate together invert omelet, browned side up, into skillet. Cook omelet until underside is set, about 1 minute, then slide omelet onto a serving plate.
Posted by Izzy's Mama at 10/05/2007 09:15:00 PM