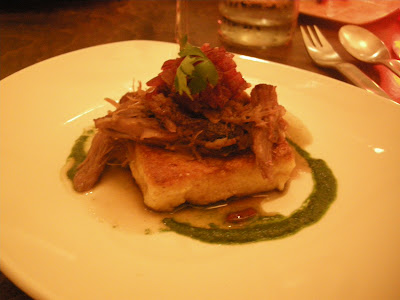 OX, the newest addition to the Jersey City restaurant scene, has finally flung open its doors. After 'preview' dinners served October 13th and 14th, they opened to the public this past Wednesday.

Starting a new business (or renovating a house) in Jersey City, can be a painstakingly long process and for OX,it was no different. Locals, myself included, waited patiently as we watched the owners slowly transform an old restaurant space to the new, spare and modern Ox. When I heard the initial positive reactions I decided there was no need to wait any longer, despite my avowal last week to do otherwise.

So when my dad mentioned getting together last night, I knew just where we would go. He was certainly game to try something different since we always go to the same old places. Late Sunday afternoon, Izzy was not in much of a restaurant-going mood since he has had a cold all weekend. I decided we would go anyway since we had an early reservation and the restaurant is so nearby.

We arrived to find a fairly empty restaurant but it was rather early. They have banquet seating which is always great for kids and it was comfy for all of us. Happily seated, I thought I wouldn't even have to look at the menu since I had studied the on-line version.

Surprise! The server informed us that they would only be serving from a limited version of the menu, something which did not come up in the preview buzz, where I had heard rumors of rabbit.

Fortunately the choices were easy to work with and my appetizer of choice, the Oxtails on a bed of polenta was still available. I also ordered the Duck Confit. Izzy had the Sweet Potato Salad with Roquette and the Broccoli and Cheese Gratin.

The oxtails were a perfect signature dish (but please serve them hotter!). Tender shreds of meat atop a crispy/soft polenta square.......dreamy.
The duck confit was better than some I have eaten in Paris. And without going into minute detail about the other dishes, everything else was worthy of a return trip. There was really only one thing lacking in this otherwise delightful restaurant, BREAD!

Maybe in this low-carb, no-carb age, people will find this acceptable. Not so for my family, who found it to be profoundly disturbing. Granted a fine olive assortment was offered in the beginning of our meal but Izzy was longing for some bread to entertain him before the food arrived. No bread option equals antsy Izzy and even worse an irate Grandpa Joe...

When we inquired as to the bread situation, we were told that the food was so hearty they didn't want diners to "fill up on bread." Surely they jest. Bread is an important component of most restaurant meals (excepting Asian restaurants of course) and I am certain that most adults can monitor the own bread intake. My old French boyfriend would not have eaten a meal without it, nor would my Russian-born grandfather for that matter. Indeed, it is the staff of life.

We caused such a fuss that we were told that there was some cornbread we could order (not sure if we paid for it or it came gratis). These turned out to be corn madeleines which seemed slightly sweet and better suited for dessert rather than dinner. Despite their inappropriateness, they helped calm Izzy (and Grandpa Joe) until the appetizers arrived.

Following the appetizers our meal was somewhat rushed because Izzy began to ask to leave and was barely touching his food. We didn't even have a chance to contemplate desserts so you know we will be back. As for the bread issue, my dad had a great idea for our next visit (B.Y.O.B - Bring Your Own Bread). I, on the other hand, just hope that the chef will reconsider. There is a world of fabulous bread out there, either to make or buy...

Quite a good review - I haven't made it over to Ox yet but my friends tell me both the food and the service are indeed well beyond what's normal for newly opened restaurants.

Better than our last experience at a new restaurant it seems... This one definitely seems worthy of a Path Ride to New York's "6th borough." When, when, when??

MCA: Do I know you? I trust you will find yourself at OX soon. Let me know how it was.

Sarah: Definitely better..but I still have hope for that place too!
You will have to come to give OX a try but let's wait a bit..still some kinks to be ironed out!

Nice review but have you ever heard of the "white balance" setting on a digicam? Evidently you have not.

Thanks for stopping by..I have never professed to having exceptional photographic skills..please do enlighten, rather than criticize. It is a brand-new camera and I realize that some of my photos could use help.

Oh my god, they seriously told you that was why they don't serve bread?? That is insane. Let adults decide for themselves what they can eat! And also, the portion sizes are in no way "hearty." My husband and I split an app and wished we had ordered two apps instead. And we almost always split an app and find it to be plenty of food.