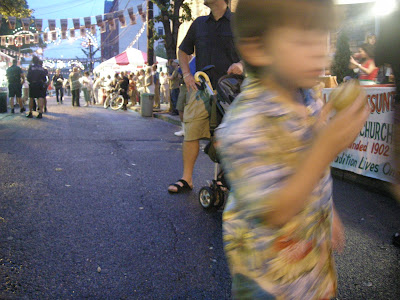 Every year, the pull is irresistible, it reminds me of my late teenage years and going to St. Anthony's feast in NYC with my boyfriend R...of course that was done on a much grander scale, with Ferris wheels and temporary tattoos (yes I did get one and so did my boyfriend. His sister thought it was real and nearly had a heart attack). In those days, a sausage and pepper sandwich was exotic fare.

The first Holy Rosary Festival we attended in JC was a hit with Izzy. He must have been two and he was able to go on some tiny rides. I managed to eat some fabulous rice balls. Last year, at three, the feast was somewhat of a washout since it was only one evening and they didn't even have the rice balls.

This year, I am thrilled to report, the feast has returned to some its former glory (at least the glory of three years ago). It has been going on since Wednesday and runs through Sunday night. We made plans for Friday night to go with Izzy's friends T. and E. so when the rains came we thought we would be postponing..but NO..these friends braved the rains for da feast..

Izzy and I arrived first, between lulls in the storm. Soon after purchasing our rice balls, we found ourselves huddled in the church doorway. When mass ended, we were pushed aside as old ladies bemoaned the sinfulness of it all as they watched the rain and asked G-d why he had done this... 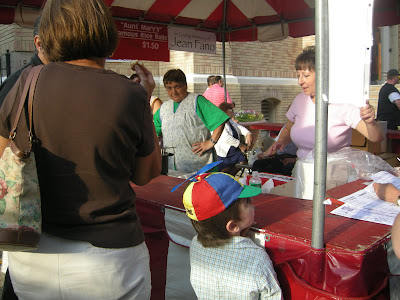 Izzy was hungry so I fed him the rice balls whilst holding my purse, a lemonade and getting drizzled upon..when our friends arrived the rain stopped long enough to play some games and go inside and eat more rice balls and some dull desserts. These rice balls seemed to lack cheese, salt and some other component which made the ones from a few years back so desirable. These were filled with chopped meat, peas and some parsley as far as I could tell. Izzy was happy to have them but me..meh...

When the rain gave up for the evening it was time to dance with Izzy and T. who had a routine worthy of Saturday Night Fever..picture Izzy with fingers in the air and T. twirling around him (awaiting guest snapshot from T.s dad). Izzy was so tired out after this I could barely get him to walk home and he pleaded for more rice balls the entire way back, even though it was way past bedtime. 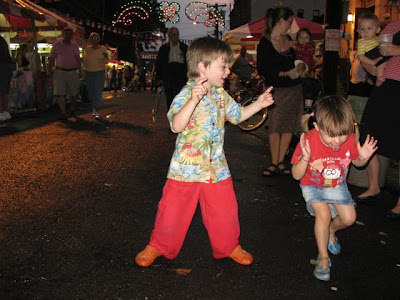 We decided to give Holy Rosary another go tonight because we could go with his friend O. and enjoy ourselves in the sunshine. This time we sampled more carny fare and even managed to have the calzone stand vendor make a custom calzone for us...Izzy got to watch as she put it together with ricotta and mozzarella in the oven instead of the fryer..fried calzones?? Not for moi..
We had more rice balls, this time with sauce which definitely perked them up but still didn't elevate them high enough. Izzy also had some kettle corn and some run of the mill rainbow ices to top off the evening splendidly healthy eats. The highlight for Izzy was the 4 Tenor band, singing O Sole Mio and other Italian classics. He actually sat and listened, seemingly mesmerized by the portly singers in their fitted black suits..quite a sight if I do say so myself. I wonder if we will make it back tomorrow night? I don't know if I can bear to see another rice ball..maybe we can just go for the music.
Posted by Izzy's Mama at 8/18/2007 08:51:00 PM