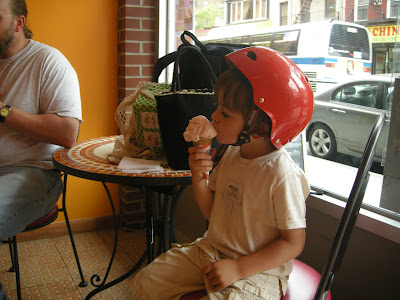 Start at Tompkins Square Park..Have your child romp around giddily, stand on the tire swing, slide belly down on some wooden slope, and work up an appetite after already having eaten much too much for lunch..

If you follow this formula, within two hours, your child should be ready for some ice cream. I scoped out the nearby choices and we scooted on over to East Village Ice Cream. This shop was opened by a former employee of the renowned Brooklyn Ice Cream Factory so I was expecting great things. The shop is small and nondescript and one is unable to view the actual ice cream which is unfortunate since that aids in flavor selection. When we arrived, some playground playmates from the day who we had steered in that direction, were already licking their cones and digging into banana splits (I wanted to share one with Izzy but he was just not into the idea). 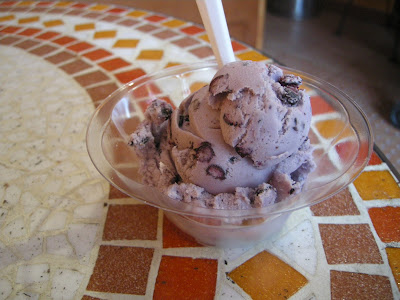 Instead Izzy chose a strawberry cone and I had a cup of blueberry. The flavor choices are simple and one patron mentioned that their mint chocolate chip is the best ever. The strawberry was creamy and old-fashioned and Izzy deemed the actual cone to be "much better than Torico's". My blueberry was in need of a dose of sugar but gained points for having whole blueberries peeking out. This is homemade, small batch ice cream which seems to be a rarity in this day and age. I would need to test more flavors for a complete review but at this point I would see, go if you are in the neighborhood...
Next we walked back downtown and passed Alphabet Scoop. We were quite full so I just read the blurb in front. This is semi-homemade ice cream, made with an industrial base. The shop employs at risk youth so it sounds like a great project to support. We shall have to come back and try it another day.
It started to rain but our walk continued on and we found ourselves on 10th street, in front of a place I knew I had read about somewhere, called Sundaes and Cones. I had to go inside, which was surely a mistake for once in, we couldn't leave. Once inside I could resist the ice creams which are displayed in see-thru cases. I decided it wouldn't harm us to share a pink grapefruit sorbet (Izzy's choice) far healthier than what I had in mind. I loved the smooth texture but it was just a touch too sweet. I will definitely be back to try the other flavors which looked truly luscious, including corn and some rich chocolate concoction.
Continuing on in the drizzle, Izzy announced he was hungry! I decided we needed less desserty fare so we stopped for a pizza snack at Pie, where they have ultra-thin crust pizza by the pound. It comes with a variety of toppings and is a great option for decent, quick food near Union Square. I thought we would be done after that but no, Izzy wanted to stop at Whole Foods, good thing too because we needed some things for dinner. We then hopped on a crosstown bus to the Path and finally got home as the rain turned heavier.
As Izzy sat on the steps taking off his shoe, he mused over his day, proclaiming his good fortune. "Today we had TWO ice creams AND a pizza.." Not to mention a giant bowl of ramen noodles and some shitaake buns. And we still ate dinner!
Posted by Izzy's Mama at 8/19/2007 10:30:00 PM