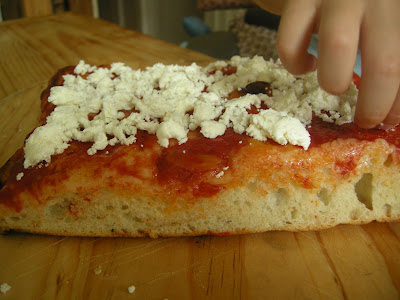 My kitchen was hot today and it was nearing noon. I had no idea what to feed us for lunch but figured that a quick trip to Pecoraro Bakery would solve everything. Izzy had been playing quietly all morning so he would get some much needed exercise on the way there and I knew that once I bought fresh bread, lunch would fall into place.

Aside from the bread, one of the best reasons for going to Pecoraro is the sheer amusement value. Each time I leave there I have a tale to tell, for Carmine, who usually mans the counter, is quite a character. Today, as he was lauding Izzy's scooting skills and complimenting his appearance ("he looks like da alta boys on Christmas cards", a black cat emerged from the back of the shop. He introduced her to us as "Midnight, the mother cat. Soon after, her children, Carmella and Stella appeared.

Not only were we sufficiently entertained, but we left with two sauced focaccie, an olive bread, a small sliced white loaf and two rolls gratis (for Izzy). All that for nine bucks!

Home for lunch which was the simplest affair..Focaccia sprinkled with goat cheese, splash of olive oil and oregano.
RECENT NOTE: Carmine no longer works there. Instead the owner's son John usually mans the counter, or his mom. Still just as charming as ever!
Posted by Izzy's Mama at 8/24/2007 10:00:00 PM

Lynn, it's your old neighbor, Eileen. I enjoyed your Parisian reporting ... we're going to London soon; got any restaurant recommendations or general tips there?

Eileen: I have not been to London in too many moons to count. But I have read a few things that might be helpful.
http://customcom.typepad.com/gastrokid/2007/01/ordering_from_t.html

Also, eating in pubs is probably a good idea and wherever you eat, go early.