I had the great pleasure of entertaining my only niece, J., today and she accompanied Izzy and me on an outing to NYC. I was my wish to give her a bigger taste of NYC than that which she has been accustomed to so far (trips in for Broadway shows and the like). I thought she might enjoy a foray into the world of the East Village and beyond.

I knew that she was interested in doing a bit of shopping and I figured lunch and maybe a museum would be in order too. I seemed to forget that Izzy needs ample park time to boot so we didn't get to everything I had in mind.

Since we were arriving close to lunchtime, first and foremost on my mind was where to eat? J. is a vegetarian and I wanted to her to have something memorable. Should we eat in some hip, veggie spot or stick with tried and true? Falafel seemed like a mundane choice but I know Chickpea is a sure bet and I figured it would be better than other falafel she had tried.

When I told her where we were going I expected her to roll her eyes with boredom. You can imagine how shocked I was to find that she had never eaten falafel before!!! How does a vegetarian make it to the age of 15 without having eaten falafel? Isn't that akin to a carnivore never having eaten a steak? All of a sudden I was more than thrilled to take J. to Chickpea since it would be a great initiation into the fabulous falafel universe. 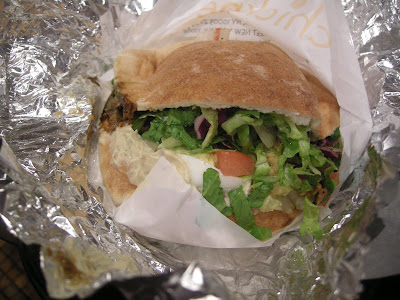 Chickpea was pleasantly empty so we were able to have a nice quiet spot in the back. J. had an original falafel sandwich. I had the Chickplant and Izzy had the Grilled-Artichoke Falafel. J. did not rave about her sandwich but I surmise that she enjoyed it since she finished the entire sandwich. Izzy wasn't thrilled with his Artichoke stuff but was more than happy to share mine. We all sipped our Lemonatas and had a relaxing meal.

After our meal, we meandered along Ninth Street and Seventh Street, popping in and out of variety of small shops, while Izzy railed and shrieked for park time. He certainly made his presence known to the shopkeepers and we finally had to relent. 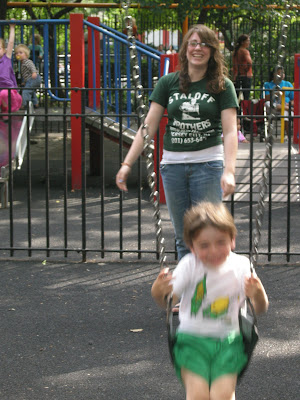 We took a short break at Tompkins Square Park and after it was over we barely had time to grab some ice cream and get back to Jersey City.

Izzy and I had a great time with J., who was full of tales for me and spunkiness for him. The shopping may have been less than stellar, but despite that, I hope this is the beginning of many more outings with "Cousin J." After she had left Izzy wanted to know if I had such fun cousins and sadly I had to say no, for I barely know the two I do have.

Meanwhile, I am left wondering about the culinary state of Hunterdon County and how it can be that my niece has never before encountered a falafel. I suppose I can partially blame myself for not spending much time with her yet on the other hand, what has my dear brother been feeding her??