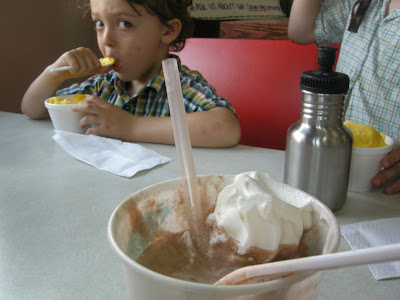 Senior year in high school or sometime thereabouts, I delighted in Dairy Queen ice cream sodas, most notably a chocolate soda with vanilla ice cream or was it vice-versa? What I do recall is that they were topped with whipped cream and I craved them, often twice daily and my boyfriend was more than happy to indulge me, by accompanying me on jaunts to the nearby Dairy Queen in Fort Lee, N.J.

It is obvious that in those days, healthy eating was not a priority. Ignorance was bliss and I had no clue as to the junk I chose for nourishment (which I imagine was purely emotional). On the bright side, weight was not an issue and I eventually kicked the habit. I haven't had one of those sodas in more years than I would like to admit...nor have I craved one. Until today.

Izzy and friends stopped in at Torico's and I was in the mood for something different. I looked up at the menu board and saw the listing. The craving hit me and I had to have one, a vanilla soda with chocolate ice cream. Turns out, the chocolate ice cream machine was down so I had the opposite. It was every bit as tempting as I remembered. I even let Izzy have a sip - I could see that he too was smitten. I hope he doesn't remember it the next time we are there. I don't wish to renew old habits...