The Butcher, The Baker... 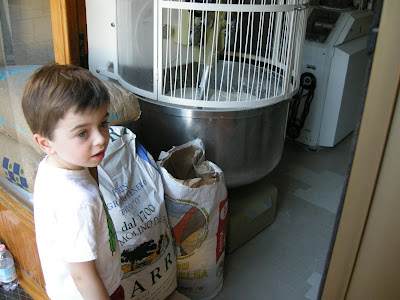 Whenever I arrive in a small European town, I feel it is my duty to sniff out the best bakery or pastry shop. Our first morning in Greve, Alex sent us to the one bakery he knew of, to pick up a morning snack. I wasn't impressed and neither was he but it was the only one he had tried. So the next day, Izzy and I discovered a different bakery on the other end of the piazza. This one had a line, which is often a sure sign that you have found the right place. There we had some schiachiatta (Tuscan foccacia) and some flaky cream-filled horns. We continued to frequent this bakery, each time, discovering a different item. We ate rice and cream-filled pastries, raisin cookies and some breads that were a bit too hard for my tastes.
The highlight of the these bakery visits, occurred the evening when Izzy noticed the baker at work in the shop window, immediately adjacent to the retail shop. He was mesmerized as he watched the enormous mixer and it's giant "arms", knead the dough. The baker was quite friendly and when his young daughter joined him, Izzy became even more enchanted by the entire scene. They offered him some biscotti but he declined since his belly was already full of the other treats we had just eaten. He stood in the doorway of the bakery for more than 1/2 an hour until I had to practically drag him away with promises to return.
Posted by Izzy's Mama at 7/02/2007 04:49:00 PM

Stay tuned in twenty years for a new blog, "Izzy the Baker." I smell a new passion for Izzy.

Have a wonderful time! When you return I have a new JC pizza for you to try - at Cosi, of all places. There is an earnest man sweating there over pizzas, and they are surprisingly good, I thought...

But lets not get into that right now when you are trying more native fare...thank you for writing of your adventures this summer...

Thanks for reading..I shudder at the thought of Cosi pizza..you will have to convince me upon my return.