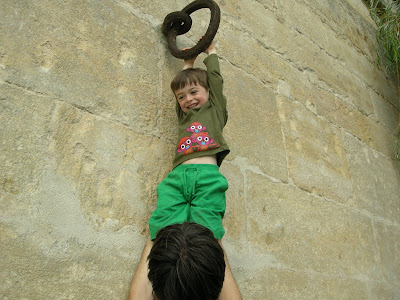 We are finally all together, at least for a couple of days until Alex has to go back to work. At least we will still be in the same city.


Today some colleagues of his invited us to lunch at Laduree, an extremely traditional tea salon, know for cafe Viennois, Croissant aux Amandes and French Macaro0ns in all flavors. I used to breakfast at the original location which was known for its extraordinary decor and I didn't realize that they have since opened two more. Lucky I happened to check a guide. I automatically assumed we would be dining at the original as it is certainly the grandest of the three. Good thing I decided to inquire for it turned out we were eating on the Champs Elysees, an area I would ordinarily not venture to.


I knew we would be dining rather late so Izzy had some snacks beforehand to tide him over, so he only nibbled on his lunch. Strange thing about the menu..Le Club Sandwich figured prominently on the menu, albeit a French version. I ordered a salad and two club sandwiches, figuring Alex would finish any leftovers. Funny to think, we came to Paris and ate club sandwiches. 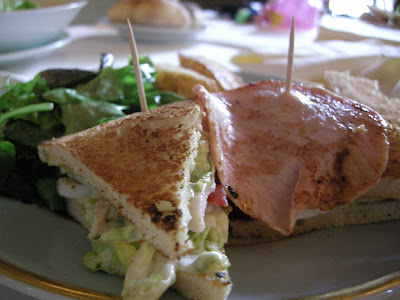 They were certainly better than any American club sandwich yet it still seemed a wee bit odd. The salad, however, was decidedly French, composed of a variety of vegetables and lettuces, ever fresh and delicious.

The show stealers here, though, are the desserts. I ordered a Religieuse au chocolate and Izzy ordered the mini-macaroon tasting. He selected four different flavors; chocolate, vanilla, raspberry and rose. When those arrived, the fun began. First he tried the raspberry and set it down, then he tried the chocolate and proclaimed it to be the best. Next he tried the rose and couldn't put it down. Last was the vanilla, he picked it up to take a bite and it escaped from his grasp, rolling to the ground. Soon he and I were under the table in this rather fancy restaurant, trying to retrieve the lost macaroon. We must have made an amusing sight to the surrounding diners. Mission accomplished, we adhered to the 60 second-rule and Izzy ate it up too! Verdict, rose was best (tasted a bit like soap to me!)

When our meal finally ended, Izzy had clearly had enough of was longing to jump and play. We had a long walk along the Seine and some time at the Jardins de Luxembourg. Then it was time for dinner.