Our breakfast has been virtually the same every day: Baguettes smeared with bread and butter, fruit, sometimes yogurt and steamed milk and tea (cafe noisette for Alex). If I do say so myself, American breakfasts are far more interesting and varied.

We took Alex to our little market street and tempted him with all manner of cheeses and pates. We also discovered that Le Marche des Enfants Rouges is more interesting than I had first thought. We discovered an interesting vendor of all things Moroccan and there was also a Socca vendor. I promptly ordered one which we all devoured. For those of you who don't know, socca is a savory chickpea flour pancake, a nicoise specialty. After that snack we found ourselves back home for another small feast for lunch.

We ate so much, that Alex and I fell asleep while Izzy played egg games with a sheet. I awoke when it seemed to quiet to find him leaning out the window gazing upon the street scene below. (Note to self..next time find an apartment with safer windows and better views).

Our post-prandial jaunt led us to the Grand Palais, to see the Monumenta exhibit that has kept Alex busy for awhile. The work was impressive and Izzy was thrilled to see where "Papa works." Izzy built up quite an appetite wandering around admiring the enormous pieces. So he needed a hearty dinner.

I had heard that Chez Janou served up hefty portions of hearty fare so off we went. This lively restaurant was bustling with tourists of all kinds. It was charming and the menu had a provencale slant. Our appetizers were memorable. Izzy had a Salade d'ecrevisses, avocat et pamplemousse (tiny shrimp, avocado and grapefruit on a bed of lettuce) which was one of the more inventive menu items I have seen at the medium-priced restaurants we frequent. While I had Fenouil Croquant avec Hareng Fume (Smoked Herring and Fennel Salad) and Alex had Moules Gratinees (Mussels Gratin). These were also quite satisfying and Izzy enjoyed tasting all of them. 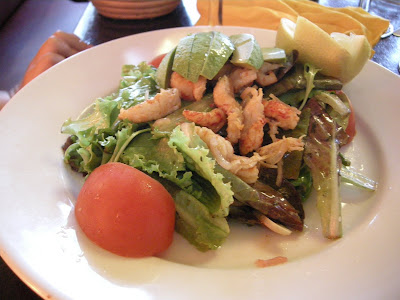 Our mains were not quite as pleasing. Alex had what was called, Farci Provencale and turned out to be three very small vegetables stuffed with a meat mixture and served with rice on the side. I had Agneau Roti avec Haricots verts...sliced leg of lamb and green beans which was tasty albeit ordinary in preparation.

And the meal had me thinking that we had eaten something similar the night before and that perhaps there was something to David Lebovitz's argument that, overall, one might eat better in the States. Sure France does have certain foods that can't be beat, and the markets are certainly better, but there may just be more restaurant innovation aux Etats-Unis.
Posted by Izzy's Mama at 7/07/2007 03:50:00 PM

Ooops, I should have read this first before commenting on the previous entry... I think I have the same opinion of Chez Janou. What I really like about Chez Janou is the price vs. quality. I can afford it. Try La Marine and let me know what you think.

You can't afford anything anymore..Paris is ridiculously expensive. It is sad for Americans. Also, I got hives after eating at Chez Janou!