Just as I do, Alex likes to return to old haunts, revisit the tried and true. He had been to Paris quite recently and held a fond memory of small restaurant on the rue Guisarde. He didn't remember the name of the place or the street but he claimed to feel vibrations which somehow led us there. He recalled that they prepared a decent foie de veau and was yearning to eat it again.

The restaurant was called Le Machon d'Henri ( 8, rue Guisarde, Paris 6eme) Now ordinarily I don't like to eat somewhere without having read about it first but his recommendation was good enough. The place looked cozy and the menu was appealing. Once again, basic French fare in a rustic atmosphere. And they had a perfect table in the far back, so we wouldn't disturb any of the patrons.
Izzy had a lovely Salade de Lentilles aux Lardons and I had a Salade de Petoncles..I had no idea what they were but figured I would find out soon enough. When they arrived Alex called them, "giant barnacles" which is indeed what they resembled. 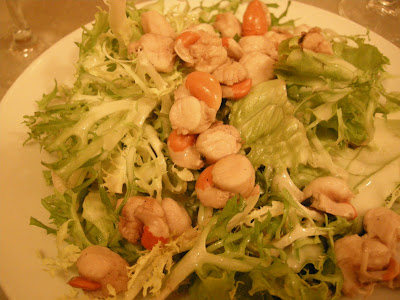 Izzy contentedly spooned up his lentil salad and was more than happy to taste my petoncles. I ordered lamb chops which he tried but he seemed happier to eat his Papa's calves' liver. I don't generally eat veal myself but I have heard that in the States ethically raised calves are gaining favor..I wonder if the same is happening in France.

All in all, it was another homey dinner and had us debating again, where does one eat better, Paris or NYC?

A petoncle is a scallop.

A peduncle is a lobster's eye-stalk.

There's a delightful resto in the 20th in which I consumed peduncle-speared petoncles on my honeymoon. That, you can't get in NYC.

Interesting..they didn't look like any scallops I have ever eaten but in retrospect, I suppose you must be right. The scallops I am familiar with are Coquilles St. Jacques.