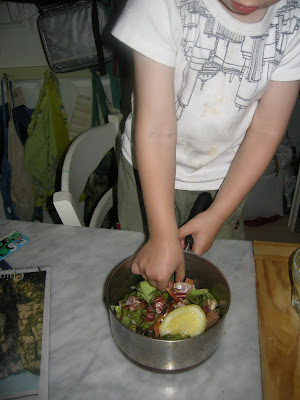 Who ever said don't play with your food had it all wrong. Having children play with their food is a great way to get them to eat it. The best way to do that is during cooking, which also turns your chores into play.

Izzy has been a presence in my kitchen since birth. When he was tiny he experienced the kitchen while swaying in a sling. When he was old enough, I put his bouncy seat on the counter and waved spices and garlic under his nose to include him in the preparations. The older he got, the more he could participate. He began by peeling garlic cloves, pulling off onion skins and other small tasks which are perfect for little hands. He has now graduated to cutting, stirring and evening inventing his own recipes.

The best part is, that cooking becomes entertainment. Instead of thinking, what am I going to do with the little ones while I cook dinner, it is easier to just include them in the fun.
Izzy has recently created his own kitchen game. He likes to take all of the scraps from my cooking and create "Monster Soup." Tonight's mixture included shallot skins, garlic peels, lemon slices and artichoke scraps. He insisted that it be boiled for 10 minutes. He wanted to leave it in the yard for the monsters to eat. I hope they liked it. 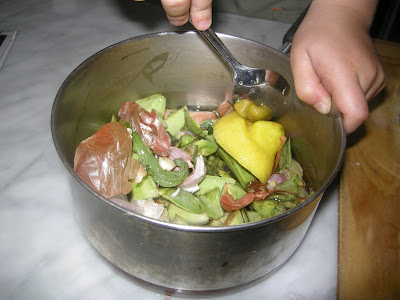