Don't Touch That Booty: Which One Is Worse? 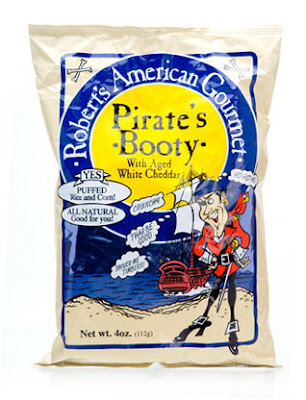 A few months ago, Izzy came home from school and told me that a friend of his there liked to touch girls' booties and run away.. I asked if he knew what a "booty" was and he said, "Yes, a tushy." This was somewhat disturbing but I hoped it was an isolated incident. Thankfully I never heard that word from him again..

But then yesterday, another Booty arrived to plague me...Izzy came home from school with his lunch only half-eaten. This surprised me since there were things in there he liked. He said he wasn't hungry because he ate strawberries and some "junk food" for snack. When I asked what kind of junk food he replied, "junk food with cheese." I still was reluctant to believe that he had been served junk food and continued to press him for answers. He insisted that he was certain it was junk food and finally relented.."They were cheesy puffs like someone once gave me in the park."

I was dumbfounded..his teachers had actually served him cheese doodles or a relative thereof? How could that be? It was time for an explanation..

When I went to pick him up today, I was determined to get to the bottom of the junk food charge. I was told that Izzy was correct. The preschoolers had eaten "Pirate Booty".. Oh no, what I thought was a mere misunderstanding turned out to be practically true. Izzy was being fed the evil puffs, by those charged to take good care of him.

Now in all good faith, the school staff thought that this was a healthy snack.. They as many other well-meaning parents and teachers are being duped.

In recent days, Veggie Booty has been recalled because of salmonella contamination. The Booty empire was also embroiled in misrepresenting the caloric content of their products. Granted, if you read the label, the product looks relatively benign but consumption can cause unnecessary bloating and diarrhea, filling one up with empty calories. I know that parents and teachers often need to resort to convenient snacks but there certainly are better things that could substitute..pretzels, whole wheat crackers, tortilla chips and salsa, to name a few.

Your loyal readership demands accountability. Your sensibilities may be offended by a healthy snack masquerading as junk food, but that doesn't actually make it unhealthy. The ingredients are listed below.

What, pray tell, makes Pirate Booty (baked, not fried) unhealthy as compared to whole wheat crackers, many of which contain partially hydrogenated fat, or tortilla chips, which are essentially corn meal and oil (i.e., Pirate Booty, minus the cheddar cheese dusting)?

"Pirate Booty is nature's bounty in crunchy nugget form." That will be my campaign slogan in '09 -- and a winning slogan 'twill be.

I am not the first to say it:

"It seems the rice puffs were not manna for moms but ordinary junk food in disguise, containing as much fat as a bag of corn chips -- and more than three times the amount advertised"

"Jay Leno mocked the suit on his show, saying: "Here's a tip: If the snack you're eating contains the word 'booty,' you're probably not going to be losing much weight."

and furthermore:
1.Not all tortilla chips and crackers are created equal.
2. Nina Planck and Marion Nestle would not characterize "Booty" as a Real Food.
3. I would prefer that Izzy not eat any of the above mentioned but some are the lesser of a few evils.

Wow, you are one controlling mama! Do you control all aspects of your child's life or just what he eats?

How can I possibly entertain a question from "anonymous?" Make thyself known..Have you read my blog before? What are your credentials?