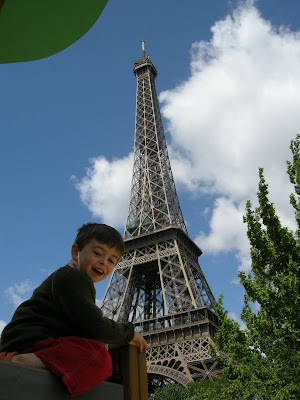 This morning, July 4th, we awoke with a plan. We would have breakfast at home and then finally take the Metro to the Eiffel Tower, of which Izzy has been dreaming since long before our arrival in Paris. He and his papa constructed one from wood and it is now forever etched in his mind as a magical venue to visit.
In order to get an early start we would have breakfast at home. So last night I had the forethought to purchase a baguette for that purpose. It wasn't just any baguette but instead one that was "a la tradition francaise" which I am guessing means that they actually prepare the dough at the bakery instead of buying it although I am not quite sure..will inquire next time.
We had it for breakfast, toasted with butter, accompanied by some wonderfully fragrant melon and yogurt. It was definitely an excellent baguette. We always linger too long over breakfast, especially one like this, so we were off to a rather late start.
Izzy was intrigued by his first ride on the Metro and stared out the window in amazement the whole way there. Once on the street, we stopped to have a banana-chocolate crepe, which Izzy munched along the way. When we finally arrived we were faced with lines of over two hours long. Izzy insisted on waiting but I had an inkling that after awhile, the desire for food and play might trump the need to climb the tower. Around 1 p.m., the "I'm hungry" mantra began and within minutes Izzy decided that we would go play in the little park near the tower and then get some lunch. The Tower would have to wait for another day. Although I would say that Izzy had a great taste of the Tower since he played in its shadow until the rain began.
Then I had to think fast..I needed to find a suitable lunch spot, not too far away, a place to shelter (Izzy's favorite expression.."we need to find shelter.") us from the rain, where we would be well-fed. I had actually spent two months living in the 7th arrondisement so was familiar with a few places, one of which, La Fontaine de Mars, was one of the first restaurant memories I have from my days in Paris. I actually went there with friend I met in my hotel, along with Anne Willan, although I had no idea who she was at the time..

The restaurant was still there, on rue St. Dominique. We were ushered inside but I was somewhat disheartened when the hostess claimed we could only eat upstairs in the smoking section. Izzy and I were crestfallen but then she exclaimed that it was unlikely that many people would be smoking we decided to stay. After our order was placed, Izzy dictated his journal entry to me and then we discussed the rest of the day. I said that we would probably eat dinner at home since we were having this special lunch. He said, "I want to eat lunch AND dinner out mama!"

Izzy had an appetizer of leeks with herbs and I had "Oeufs en Meurette" which is eggs baked in wine with bacon. We then shared a confit de canard which is one of my favorite french dishes. The crispy duck leg was served atop rounds of fried potatoes. Although it was tasty I am afraid its crispiness was a result of frying rather than broiling which made it a tad greasy.

That didn't seem to bother Izzy, as he kept opening his mouth for more, like a hungry bird, and then running off to play with an ill-behaved French boy who soon had him crawling under the table, as his parents dined in an adjacent room. The women who were dining next to me, recognized my plight and shooed the boy back to his parents. They recognized that Izzy had been quite the angelic dining companion until he fell prey to evil influences.

Thankfully, lunch ended with no incident and the sun emerged once more.
It was time to visit Notre Dame. We walked the whole way there, stopping along the way to pick up some pain au chocolat at Millet, a great pastisserie along the rue St.Dominique.
Posted by Izzy's Mama at 7/04/2007 03:30:00 PM