Is There More To Paris Than Just Food?

What message am I sending Izzy? Certainly I live to eat and good food is a priority but today I really tried to have an agenda which included more than park visits scheduled between meals. 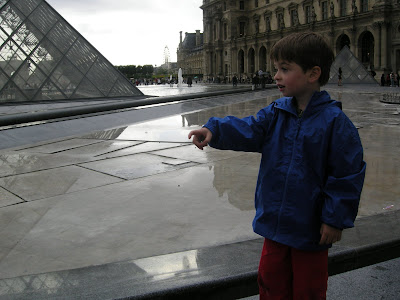 We managed to go to Le Louvre and discovered that having a stroller allows you to bypass lines...Izzy was most interested in the glass pyramids as we entered the Museum. He did get to glimpse the Mona Lisa, Les Noces de Cana, some breathtaking statues and whatever else he managed take notice of in an hour's time, for once inside, the crowds were truly stifling.

When we left we spent some time outside just looking at the buildings and pyramids.

Since it was still early, we hopped on a bus to the Eiffel Tower, in hopes of finally going to the top. I had forgotten how relaxing and scenic a bus ride through Paris can be. Izzy had a great time looking out the window and recognizing places we had already visited.

When we got off the bus, instead of heading straight for the Eiffel Tower, we walked to the nearby park where we discovered an entire play area, with two carousels, donkey rides and other features. One of the carousels was hand-cranked and had an added attraction. Each child was given a stick with which to grab metal rings, that were suspended in one area as they passed. It was a challenge for Izzy who had never done it before. 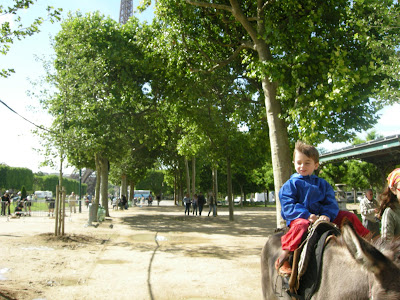 Later on in the small park, Izzy attempted to jump from atop a train play toy and landed flat on his face with a mouthful of sand. His nose was bleeding and he bonked his chin. He was hysterical and all of the French moms were none too sympathetic.. They thought he was six and too big to be crying or something.. They kept saying.."Tu est un grand garcon.." And then I said, "He is only four" and they said that they thought he was six and that he was big for his age..

After that episode, I decided to call it a day. We went back to our neighborhood and bought some provisions for Alex's dinner since he would be working late (and the sales clerk gave Izzy another treat..an elephant ear - oops, left that out of the above post!) By the time we returned home it was already time for dinner.
Posted by Izzy's Mama at 7/09/2007 04:22:00 PM

I don't know, you should see our photos of Spain - food, food, and more food! We were there for 2 weeks and maybe went to 2 museums, the rest of the time we went to markets, food stalls, local grocery stores, and restaurants.