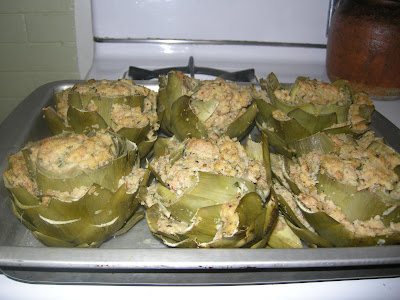 I did not encounter an artichoke until I was about 17 years old. My Italian-American boyfriend, R.D., introduced me to them at his house, where I often ate dinner. In that family, artichokes were served on a fairly regular basis, although they did seem to appear on special occasion. We would come in to find huge trays of them left to cool on the counter. His dad's version was stuffed with breadcrumbs, garlic, herbs and cheese.

I longed to copy that recipe but his dad wasn't the sort to sit down and give up his secrets. So I started to search for my own. As it turned out, one of my favorite first cookbooks, The Silver Palate had a winning recipe for them and soon I was turning out stuffed artichokes to rival those of R.D's family. The filling I made was more complex and contained sausage, and also included cheese, breadcrumbs and herbs. This artichoke is a meal, in and of itself.
When I went off to college, my desire for these artichokes grew and I continued to make them on a regular basis. Friends started to request them and I found myself removing chokes rather than studying.
During my junior year, I went so far as to prepare 26 artichokes for a party I threw for my Italian class. Since then, my artichoke preparation has been sporadic but when Izzy became old enough, I decided I needed to introduce him to the artichoke, so that it would be a normal part of his repertoire. And if you think about it, artichokes are such a perfect food for little hands. The whole process is exciting, from picking off the leaves and sucking them, down to cutting up the heart in the middle. It is a unique eating experience.
Yesterday was a milestone because Izzy was able to actually help in the preparation, making light work of the sometimes annoying task of removing the choke. Together we stuffed six artichokes and he was able to bring one for his lunch and one to give to one of his teachers, Mr. D.
When he came home from school today and I asked him about his lunch he claimed that "Some of the teachers didn't know what I was eating." Curious, were they teasing him or is that possible? I suppose if R.D. hadn't introduced me to them, I might not have known either.
Recipe to follow shortly. Check back.

4 large artichokes trimmed ( you can easily adapt to make more, which I always do. These make great leftovers)

1/2 lb. Italian sausage, removed from casing and crumbled (I use the turkey sausage from DiPaola Farms which works quite well)

Trim stems of artichokes so they sit upright. Put lemon juice in a pot of boiling water and add artichokes, cooking for 20-30 minutes until a few leaves pull out. Do not overcook.
2. Heat half the oil and saute onion, garlic, and parsley over low heat
for about 15 minutes or until soft.
4. Add sausage and cook 15 minutes more, breaking up lumps as it cooks.
5. Transfer to a large bowl and add bread crumbs, chicken stock, oregano, salt, black pepper and cheese. Toss gently and allow to cool to room temperature. Beat the eggs lightly and stir into mixture.
6.Preheat oven to 350 F.
7. Carefully spread open the cooled artichokes and remove the choke from each with a spoon. Fill the cavities with the stuffing and force any remaining stuffing into the outside leaves.
8. Arrange the stuffed artichokes in a shallow baking dish and drizzle with remaining olive oil. Add a cup of water and cover tightly with foil. Bake for 40 minutes.
9. Warm or cool with lemons and parsley.
Posted by Izzy's Mama at 7/25/2007 09:20:00 PM

who would think to eat a big purple flower?
emile's favorite food, next to avocado.

The artichokes look fantastic! I can't wait for the recipe since my 7 year old daughter LOVES cooking and eating them. My other kids and husband would leave them alone which means "more for us!"

Elizabeth: It is an unusual thing to eat.

Lea: Thanks and they taste even better..I don't see how the rest of your family will resist. How do you usually prepare them?