Octopus AND Sushi? A preschool uproar..

Perhaps Izzy's artichoke caused a stir amongst his preschool peers. Perhaps it was just something in the air that brought out the conversation about the foods children eat. Was it over his lunch of 1/2 an artichoke, along with an ear of corn, yogurt and some plums that the buzz occurred? Who knows but this is what happened..

When I arrived to pick him up, one of his teachers, Miss A., informed me that at some point in the day, talk had turned to the different things everyone eats. She said that Izzy told everyone that he liked to eat octopus and "raw sushi fish." The entire group ewwwwwwwwwwwed in disgust. Apparently not a single one had eaten sushi.. How is that possible? Granted with all of the bad press and mercury, consumption should be kept at a minimum but no sushi at all? And here I was thinking Jersey City was so cosmopolitan, 8 minutes from the Path from NYC but worlds away? I know Izzy's peers in NYC are munching up sushi left and right.

In any event, Miss A. had to explain to Izzy's friends about how everyone eats different foods, etc...I wish I could have been there. Maybe I need to plan a sushi introduction party for his class...

All that talk of sushi put Izzy in sushi-mode so on our way home from Great-Grandpa's this evening, instead of going to my selection, we agreed to go for sushi. We tried a new place, JC Sakura, which I had long eschewed for other establishments and it turned out to be fairly decent, especially my mango-lobster roll. Izzy was especially awed by the sushi boat. Even I was. 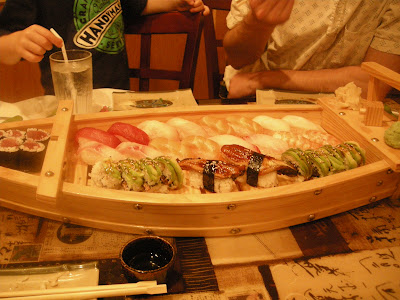