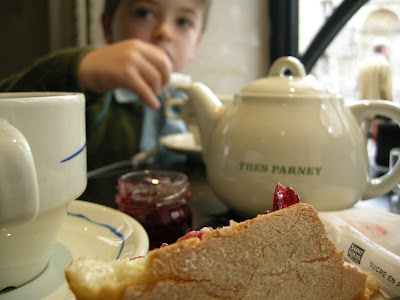 Izzy and I awoke to a sunny first day in Paris. We had plans to eat and then shop for some essentials. We found a nearby cafe and since it was chilly, seated ourselves inside. I knew that Izzy would delight in a foamy steamed milk which he sipped while eating his baguette slathered with butter and jam. I had tea and we enjoyed our first morning in my favorite city.
Later on, we stopped by a boulangerie in the 4th where I had been a regular back in the day. A language first occurred when I ordered Izzy's Macaroon au Chocolat. He overheard me ordering and piped in , "No, I want pistachio instead." He understood the word "chocolat"! Since when did he eat pistachio desserts? 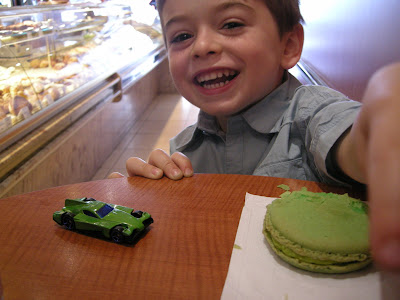 Apparently he doesn't. The green color appealed to him, maybe because it matched his car. After one bite he decided he didn't need anymore. I didn't finish it since I am not fond of pistachio desserts myself.

We lunched on a fougasse from the same bakery. In case you are wondering, fougasse is a southern french relative of focaccia but the dough covers the filling and has large holes in the top so you can see it peeking out. They come with different fillings and I had goat cheese and vegetables. I was a bit disappointed since it didn't taste as I had remembered...though Izzy seemed happy with it so tant mieux. It's been such a long time I wonder if the bakery is owned by the same family.